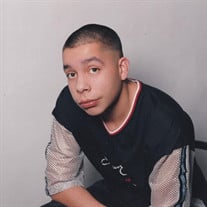 Dear Cheyenne River Lakota Oyate Family, the funeral arrangements for a CRST Tribal Member are for your prayerful concern: Aadam Tiger, age 37, entered the Spirit World on Wednesday, September, 15, 2021 at the Cheyenne River Health Care Center at Eagle Butte, SD A wake service will begin at 7:00 PM, Tuesday, September 21, 2021 at St. John’s Episcopal Church at Eagle Butte. A Funeral service will begin at 10:00 AM, , Wednesday, September 22, 2021 at St. John’s Episcopal Church, with Mother Ellen Huber officiating. After a luncheon, burial will follow at the Emmanuel Episcopal Cemetery at White Horse, SD. . Aadam Bryant Tiger came into this world on February 05, 1984, to Harold and Kitty Tiger at Indian Health Services in Eagle Butte, SD. He was born at 4:51 pm, weighed 9lbs.13oz, length 22in, head 11 ½ in., chest 12 ½ in. He attended school at C-EB in Eagle Butte and graduated in 2002. Aadam was married to Teri Albers on December 02, 2003. Two children were born Aadamys Bryanne and Aadam Bryant Jr. Tiger. In 2017 he met Kayla In the Woods, to this union they had (3) children. Aadam worked various jobs on CRST such as dog catcher, maintained man, House Keeping, Security, Boarder Patrol, He was CPR and First Aid Certified and a jack of all trades and was able to fix everything from repairing cars, to renovating and landscaping homes. He made many friends amongst his co-workers, and most everyone was fortunate to meet him. He had a sense of humor that made being around him in any capacity a lot of fun. Many humorous stories about him can be told. He also enjoyed cooking and he was good at preparing some of his grandma’s recipes. HE IS THE GREATEST FISHERMAN EVER. He was very compassionate man, always willing to give a helping hand. That’s what he is remembered for. He is survived by his parents, Harold and Kitty Tiger, Eagle Butte; siblings, Robert, Elliot and Arizona of Eagle Butte. . His significant special friend, Kayla In the Woods, Eagle Butte. His has 8 children, Hayzil, Aadamys, Aadam, Jr., Kyrie, Kae’Leah, Raiden, Hunka daughter Devany and hunka son Tanner, of Eagle Butte. Hunka parents, Diane and Donovan Pretty Weasel of Eagle Butte. He did numerous nieces, nephews, (12) god children, numerous aunties, uncles and cousins. He was proceeded in death by Walter and Anne Woods, Alta and Jerome Tiger, Sr., Victoria Mathews, Jerome Tiger, Jr. and Kenny Tiger, Harry F.C. Woods, Mollie White Eyes, Suzanne Paula Woods, Constance Red Horse-Aungie, Caroline Pretty Bear. Funeral arrangements have been entrusted with Rooks Funeral Home of Eagle Butte. Sincerely, Charlie Rooks funeral director

The family of Aadam B. Tiger created this Life Tributes page to make it easy to share your memories.