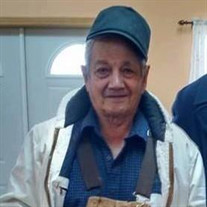 Albert C. “Swap” Arpan, Sr., age 85, of 212 Day School, SD, entered the Spirit World on Saturday, June 16, 2018, at Cheyenne River Health Center, Eagle Butte, SD. Albert Chris “Swap” Arpan, Sr. was born April 9, 1933 at the Old Cheyenne Agency to Antoine and Emma (LeBeau) Arpan. He grew up around the Timberlake and White Horse areas. He attended the Old Agency School and a couple of other area schools. After his sophomore year, on June 16, 1953, he enlisted in the U.S. Navy during the Korean Conflict and served active duty aboard a Navy battle ship as a deck troop commander. After 8 years of distinguished service, he was honorably discharged from the Navy on June 15, 1961. In 1958, Albert married Marge Dupris and from this union they had four daughters: Sharon, Elaine, Alberta and Helen. In 1965 he later married Rosalyn Bordeaux and together they had five children: Christopher, Violet, Terrance, Albert, Jr., and Delbert. Upon his return from the Navy, he made his home in Rapid City, SD. He later moved to Chicago, IL where he worked in the car factory industry. From there he went to Sioux City, IA to work at the Iowa Beef Factory. He also attended Western Iowa Tech in Sioux City, IA, where he pursued a degree in the welding trade. After he received his Trade Certificate he went to work building grain silos. Later, Albert returned to Eagle Butte where he begins a long career working for the BIA Schools as a custodian and bus driver. On May 25, 2000, Albert retired after having completed a distinguished 37 years of dedicated service with the BIA. To stay busy and active, Albert then worked for various area road construction companies as well as working at the 212 Day School clinic. Albert was quite the arts craftsman and during his retirement years he also kept busy with his specialty hobbies where he would design buffalo skulls, make willow canes and wooden lamps and make very unique lamps from antelope horns. He is survived by his wife, Rosalyn Arpan, of 212 Day School, SD; four sons: Christopher Arpan and Terrance Arpan of Pierre, SD; Albert Arpan, Jr., of rural LaPlante, SD, and Delbert Arpan of Eagle Butte. Five daughters: Sharon LeCompte of Ridgeview, SD; Elaine LeBeau of Aberdeen, SD, Alberta Richards, Compstock, NE, Helen Arpan, Dupree, SD and Violet Aragon-Arpan of Lander, WY. One surviving sister, Lenora Jackson of Rapid City, SD. 20 Grandchildren and 16 Great Great Grandchildren. Albert was preceded in death by his parents, Antoine & Emma Arpan, two brothers: Wesley and Alvin Arpan and one aunt, Lucy LaPlante. A funeral procession will begin at 4:00 PM, Thursday, June 21, 2018 at the 4 mile junction heading to Eagle Butte, where a one-night wake service will begin at 7:00 PM, at CRST Old Agency Building in Eagle Butte. Funeral services will begin at 10:00 AM, Friday, June 22, at the Old Agency Building, with Sr. Addie Morris officiating. After a luncheon, burial will follow at the Bordeaux Family Cemetery, 3 miles West of LaPlante, SD. Funeral arrangements have been entrusted to the care of Rooks Funeral Home of Eagle Butte, SD.

The family of Albert C. "Swap" Arpan Sr. created this Life Tributes page to make it easy to share your memories.