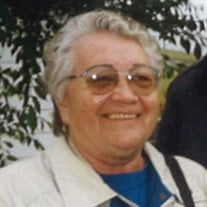 Anna Louise Schreiner, age 81, of Pine Ridge, SD, surrounded by her loving family, entered the Spirit World, on Sunday, August 7, 2016 at Rapid City Regional Hospital, Rapid City, SD. On December 6, 1934, Anna Louise (Richard) Schreiner was born in Pine Ridge, South Dakota to Theodore Richard and Zona (Rooks) Richard Pourier. Anna was the last child of three born to this union. When Anna was three years old, her father passed away. Some years later, their mother, Zona remarried Emil Albert Pourier. In total, Anna grew up in a large loving family consisting of: Calvin Pourier, Elfrieda Pourier Amiotte, Laverne ‘Leonard’ Richard, Ramona Pourier LaPointe, and Leroy ‘Show’ Richard. Anna grew up in and went to school in many places across the reservation; she loved Tuthill because of her Grandpa and Grandma Richard, along with Grandma White Rabbit who taught her and her siblings how to speak Lakota. Anna also loved Porcupine area where they would ride horses out to Grandpa and Grandma Pourier’s. Anna was courted by Robert Schreiner, and on October 29, 1955 was married. Robert and Anna had four children: Paulette, Jay Dee, Charles, and Richard. In 1966, Robert passed away, and Anna began raising her children as a single parent. Anna’s youngest children Andrea and Brandon totaled her children to six, which Anna had great pride in, because she had always wanted a large family. Anna became even more blessed, with the lives of her 15 Grandchildren and 23 Great-Grandchildren. Anna worked for the Bureau of Indian Affairs for 22 years. She began her work for the BIA first as a dispatcher, then went onto police training, where she was one of the first three women who graduated from Pierre Police Academy which qualified her to be a police woman anywhere in South Dakota. After being an officer for a few years, Anna worked for IIM Bank as an accounting technician until she retired in 1995. In 1997, she went to work at OST Flowering Tree Program for nine years as a daycare provider, and enjoyed taking care of the children. After a lengthy battle with many illnesses, on August 7th, Anna Louise began her journey to the spirit world. Anna is survived by her children: Paulette, Jay Dee, Andrea (Mike Akers), and Brandon (Jeanette), and her trusty sidekicks Jensen and Lane; brother Leroy and sister-in-law’s Josephine and Lavonne Richard; brother Ira Colhoff; brother-in-law Richard LaPointe, sister-in-law Goldie Knoderer, grandchildren, great-grandchildren, many nephews and nieces, cousins, Godchildren, and many many friends. She is preceded in death by her husband, Robert; her parents, Theodore, Zona, and Albert; her children Charles and Richard; her siblings and in-laws, Calvin and Beulah, Laverne ‘Leonard’, Elfrieda and Delbert, and Ramona; her daughter-in-law Pamla Schreiner; great-grandchild, Colter Bissonette; and three premature great-grandchildren, grandparents, Charles and Louisa Richards and Charles and Anna Rooks; hunka sister, Nancy Akers, many uncles and aunts, nieces, and nephews, cousins, and friends.

The family of Anna Louise Schreiner created this Life Tributes page to make it easy to share your memories.