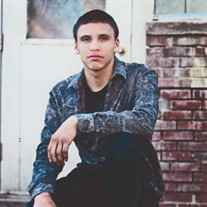 Austin Miner, age 18, of Eagle Butte, SD, entered the Spirit World on Tuesday, June 16, 2015 at Eagle Butte. He was born in Rapid City, SD on April 1, 1997 to Alan Findlay and Laurie Marshall. Austin was raised and later adopted by his grandparents Sheldon and Eleanor Miner. In his early years the family lived in White Horse, and he attended school at Tiospaye Topa in LaPlant. His family moved to Eagle Butte where he attended school, graduating on May 17, 2015. Austin was a member of the Wolves Den Boxing Club, coached by Joe Brings Plenty, Sr. He loved the sport of boxing and encouraged his little cousins to work and become boxers also, taking them with him to practice. Austin was given his Lakota name- Tate Omani Hoksila meaning "Boy Who Walks With the Wind". He was a sundancer and was very proud of his Lakota Culture. This was going to be his third year dancing at the Yellow Cloud Sundance in Manderson, SD. Austin also went to Inipi- "Sweat Lodge" at the college on Friday nights as often as he could. He had a special connection with young children, especially his little cousin Shelby. Shelby loved Austin very much and he loved her. He always made time to play with the little ones. They would play X-box games in his room, he would teach the boys boxing or they would just hang out. Austin had heart of gold. He was a very respectable young man who always greeted everyone with a smile and a hug. He will be missed by all who knew him, especially his family and his faithful dog Poncho. Austin is survived by his grandparents/adoptive parents, Sheldon and Eleanor Miner of Eagle Butte, biological parents Alan Findlay of Sioux Falls and Laurie Marshall of Eagle Butte. 4 brothers, Daron White Eagle and Kevin Marshall of Rapid City, Arden Marshall and Oliver Miner of Eagle Butte. 8 sisters Ashley Miner, Emilie Miner, Dardi Jeffries, Michelle Fischer, and Shannon Heideman of Eagle Butte, Kari Marshall of Salem, OR, Charita Marshall of Sioux Falls, and Allison Findlay of Sharps Corner SD. Paternal grandparents Gary and Wanda Findlay of Lehi, UT and Maternal grandfather Keith Marshall of Sturgis, SD. He was preceded in death by his Paternal great grandparents William Miner and Dorothy Miner, Hazel Four Bear, and Sibby Marshall. Maternal great grandparents Stanley Jewett and Harold and Annabell Morgan. Sister Dardi Lauris White Eagle and Niece Angel Marshall.

Austin Miner, age 18, of Eagle Butte, SD, entered the Spirit World on Tuesday, June 16, 2015 at Eagle Butte. He was born in Rapid City, SD on April 1, 1997 to Alan Findlay and Laurie Marshall. Austin was raised and later adopted by his grandparents... View Obituary & Service Information

The family of Austin Ford Miner created this Life Tributes page to make it easy to share your memories.