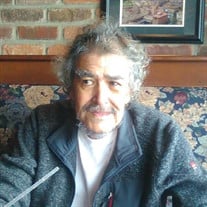 Brigman "Roger" Cornelius, age 70, of Rapid City and formerly of the Pine Ridge Community, entered the Spirit World on Monday, January 27, 2020 at the Hospice House in Rapid City, SD. A private burial services will be held at a later date at the Cornelius Family Cemetery at Red Bear Butte, Wakpmani, SD Brigman Roger Cornelius, social activist, health care advocate, and proud inmate of Facebook jail, was born in Wagner, South Dakota, on December 23, 1949, to John Lionel Cornelius, Sr. and Bessie Trimble Cornelius. He was the youngest child, joining siblings, Lucille, Shirley, Rosemarie, Judi and John, Jr. His maternal grandparents were Guy Trimble and Lucy Randall Trimble; and his paternal grandparents were Brigman Cornelius and Elizabeth Skanandore Cornelius. Roger was a member of the Oglala Lakota and Oneida Nations. Roger began his Spirit Journey on January 27, 2020 at Monument Hospice in Rapid City, SD, after a battle with lung cancer. Roger was named for his paternal grandfather Brigman and for Father Roger, who was at the Blue Cloud Abbey when his mother made the abbey’s alter clothes and vestments. He is survived by Elizabeth Cornelius; his sisters, Rosemarie Dillingham, Rapid City, SD, and Judi Cornelius, Albuquerque, NM, and his beloved kitty, abbinormal. He was preceded in death by his parents, and siblings, Lucille, Shirley, Christine and John. He was a tireless and strong advocate for social justice and economic equality – a passion that landed him in Facebook jail on occasion for calling out greed and intolerance, a badge worn with great honor. Roger work history was almost entirely in public advocacy or social development work. Roger was raised on Oglala Lakota reservation and graduated from Red Cloud Indian School in 1968 and immediately joined LaDonna Harris’ Project Peace Pipe, a part of Peace Corps. He trained in Puerto Rico, immersing in cultural structure and Spanish language. Ultimately, he was unable to accept an overseas assignment due to health issues. He continued to work with Ms. Harris in Oklahomans for Indian Opportunity, before accepting a leadership position with the Omaha Indian Center. He returned to Pine Ridge, where he worked with various programs, including the Foster Grandparents’ Program. For a number of years he managed Cornelius Enterprises, consisting of a food service, catering business and the Lakota Studios. In later years, Roger lived and work in the northern Black Hills and Rapid City, serving as a substance abuse counselor at New Dawn; as a work force coordinator; and serving on a number of health care boards and organizations, notably Community Health Center of the Black Hills, following his passionate belief that all persons are entitled to accessible mental and physical health care. Roger was a life-long Green Bay Packer fan - a legacy of his father, born in West DePere, WI, and proud Oneida. He also loved M*A*S*H A and political comedy. He was a voracious reader of political non-fiction and followed every minute of the Watergate and Nixon Impeachment hearings. One of his last acts was following the current Impeachment proceedings, with a suggestion that someone make the Atacus speech. Kindly yours, Charlie Rooks Funeral Director

Brigman "Roger" Cornelius, age 70, of Rapid City and formerly of the Pine Ridge Community, entered the Spirit World on Monday, January 27, 2020 at the Hospice House in Rapid City, SD. A private burial services will be held at a later date at... View Obituary & Service Information

The family of Brigman "Roger" Cornelius created this Life Tributes page to make it easy to share your memories.