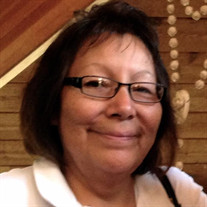 Carla Marie Jewett, age 54, of Fort Yates, North Dakota, entered the Spirit World on Friday, January 23, 2015 at the Sanford Health Center in Bismarck, ND. A one night wake services begins at 5:00 PM, on Thursday, January 29, 2015 at the AJ Agard Building at Fort Yates, ND. Funeral Services will begin at 10:00 AM, Friday, January 30, at the AJ Agard Building, with Rev. Cannon John F. Floberg and the Rev. Deacon Brandon L. Mauai officiating. Burial will follow at the Kidder Family Cemetery near Fort Yates. A Traditional ceremony will provide by Leksi Leon Reddog. Carla was born on April 3, 1960, in Fort Yates, to Felix and Isabelle (Eagle boy/Red Stone) Kidder. While growing up in the country, Carla loved her horses as she was a devoted barrel racer and loved to help her father take care of chores around the house. She also loved to play softball and dance at powwows, which is where she met numerous friends and adopted family. In 1975, Carla had her son, Carl, with Thomas Eagleman, who passed away soon after in an automobile accident. From that point on she raised him with the help of her parents and graduated in 1980 from the Fort Yates High School. Carla was also very traditional and started participating in ceremonies and Sundance with her family at the Sitting Bull Sundance, then later on at her father’s Sundance (which in now her brother Gary’s) “Zintkana Duta” Sundance, where she currently participated. In 1982, Carla married Waldo Zahn and in this union they had four daughters, they were later divorced in 1996. In 1984, Carla began her career working in Contract Health Services at the Indian Health Service Hospital in Fort Yates and worked there until the time of her death. In 1998, Carla met Lionel and they were married on July 17, 2003 and together they had two daughters and her two dogs (Owen and Louis) who were her baby boys. Carla enjoyed spending all of her time with her family at home and was always excited to see her grandchildren. She loved to lounge around the house and watch TV with a Redbull or Coke in her hand, go for a drive to visit family and friends or would always be out supporting her husband and baby girls in their many sports and activities. Carla was always willing to help out anyone in need, especially giving the homeless cigarettes, and knew many, many people from ceremonies, sundancing, working at the hospital, going to basketball games and activities or just seeing them around town. She always greeted everyone with a smile and hug and loved each and every one of her family and friends. Carla has always treated all of her children’s friends as her own and was known as “Mom” to so many throughout the years. She had the biggest heart and most generous soul, which showed through her decision to become a foster parent from 2001-2007. She gave many children a good home as long as they needed and would care for them as she did her own children. Carla recently developed a strong bond with Reddog Tiospaye in Eagle Butte and others who welcomed her to sweat and offer prayers when needed which she always enjoyed. She will definitely be missed by all who knew her. Carla is survived by her husband of 11 years, Lionel; their two daughters Nina Victoria and Blossom Jo Jewett; her other four daughters, Wynette (Joe) Snider and LeeDawn (Louis) Snider, both of Mandan; Amy (Landin) Carry Moccasin, Fort Yates, and Courtney (Noah) Kills Pretty Enemy, Bullhead, South Dakota; And two sons, Carl (Nan) Kidder, Spokane, Washington; and Michael James Kidder, Fort Yates. Hunka sons; Hans Bradley and Jerren Elk; Six grandchildren; Alex and Baby Joe Snider, Kaleb Snider, Lincoln Carry Moccasin, Larissa Kidder and Dominic Kidder. Two sisters, Denise (Curtis) McKay and Loretta Kidder, all of Fort Yates; Five brothers, Bernard “BJ” (Wilma) Kidder, Gary (Carol) Kidder, Michael Kidder and Felix Kidder Jr., all of Fort Yates, and David “Dydi” (Yvonne) Scott; Hunka sisters, Lorrie Miner and Rinissa Fitzpatrick One aunt, Joann Hogan Luta. Her adopted family, Verna and Sidney Bailey Sr., Kathy Bailey and Rhonda White, Marcia Brave Thunder, Bernadette Dauenhauer and Marilee Lawrence. Nina and Blossom’s uncle Delane Gipp; Many nieces, nephews and other grandchildren too numerous to name. Carla also had many children whom she called her sons and daughters which are also too numerous to name, but they know who they are. She was proceeded in death by her parents, Felix Sr. and Isabelle Kidder; Numerous aunts and uncles, cousins, nieces, nephews and grandchildren. Funeral arrangements have been entrusted to Annis, Rooks & Red Dog Funeral Home of Eagle Butte, SD.

The family of Carla Marie Jewett created this Life Tributes page to make it easy to share your memories.