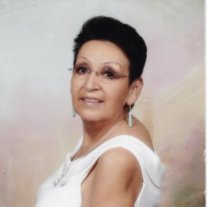 Cecelia M. “CeCe” Curly-Baumeister, 66, of Dupree, SD, entered the Spirit World on Tuesday, September 3, 2013 at Rapid City Regional Hospital. She was born at the Old Cheyenne River Agency on August 26, 1947 to her parents, Ethel Curley & Vincent White Eagle. She was raised by her grandparents, Marie & Jacob Curley. She graduated from Cheyenne River Eagle Butte High School in 1965. She attended National American University and in 1987 received an Associate of Applied Science Degree in Computer Information, and in 1988 she received a Bachelor of Science Degree in Business Administration. In 1989 she married Juan D.P. Jojola and was married to him for 25 years until his passing. After college she went on to be a very successful woman in her career as an Economic Development Director and Senior Grant Writer for 30 years. She went to Albuquerque, NM for 20 years, where she was a business manager and grant writer for the BIA school systems. Throughout her life she was dedicated to the Episcopal Church, where she successfully became a lay reader for the church. CeCe was about giving back to the community and helping people. Her grandmother, Marie Curley, gave her a Lakota name, “Wawokiya Win” (Helping Woman). Cece was a very family oriented woman, and her family meant everything to her. She is a huge inspiration to all of her family, friends and community. She is truly missed and loved. She is survived by three sons: Justin Bear Eagle and Bruce Bear Eagle of Eagle Butte, SD, Chip Baumeister of Albuquerque, NM. Two daughters: Lee Bear Eagle of Dupree and Lonna Juarez of Albuquerque, NM. Two Brothers: David West of Eagle Butte and Loren Curley of North Bend, OR. Three sisters: Nancy West of Eagle Butte, Renee West of Rapid City, SD and Audrey Houser of Fayatteville, NC. She is also survived by numerous grandchildren. cousins, nieces, nephews & friends. A cremation memorial wake service was at 4:00 PM, Tuesday, September 10, 2013 at St. John’s Episcopal Church in Eagle Butte. Memorial Services were 1:00 PM Wednesday, September 11, at St. John’s Episcopal Church, with the Rev. Mother Margaret Watson officiating. A scattering of ashes ceremony followed at the Iron Lightning Homestead.

The family of Cecelia "CeCe" Curley-Baumeister created this Life Tributes page to make it easy to share your memories.