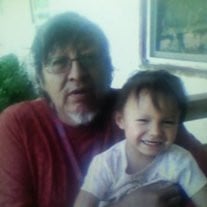 Curtis A. Chasing Hawk, 60, of Eagle Butte, entered the Spirit World Tuesday, October 1, 2013 at the Cheyenne River Health Center at Eagle Butte. Curtis Chasing Hawk was born August 23, 1953 to Vincent Chasing Hawk and Diane Eagle Staff at Old Cheyenne Agency. They resided in Red Scaffold, SD. He spent his early years in Red Scaffold until his parents moved to Faith, SD, where they lived for 9 years. He attended Cheyenne Eagle Butte boarding school and graduated in 1971. While attending C-EB he participated in football and wrestling and also won the state title in wrestling. He moved on to Haskell Junior College in Lawrence, Kansas and received an Associates Degree. After returning to Eagle Butte he was joined in marriage to Verna Meeter, and to this union was born a son and daughter, Vincent and Angela. They resided in the Swiftbird community where he was employed at a boys group home. He also helped out with the buffalo management in the community. The marriage ended and he moved on to employments in Pierre Indian Learning Center, Ft. Yates School Dormitory, Mobridge, SD, and the Job Corp Chief Gall, and Eagle Butte School Dormitory. Curtis moved to the Minneapolis area in the late 1980’s and resided there for 10 years, and worked for a company making furniture. While in Minneapolis he resided with Larry and Veronica Garner, and was their maintenance supervisor. He returned home to care for his brother, Dale. He also graduated from the Four Bands Community Fund Create Class and then began Chasing Hawk Enterprises, a business that built outdoor decks and remodeled homes on the Cheyenne River Reservation. He will be dearly missed by all who knew him throughout his lifetime. He is survived by a son, Vincent Chasing Hawk, and daughter, Angela Chasing Hawk, both of Eagle Butte. One brother, Dale Chasing Hawk of Eagle Butte and two sisters, Carol Chasing Hawk of Eagle Butte and Doris Chasing of Mobridge, SD. 11 Grandchildren. DUE TO WEATHER FUNERAL CANCELLED UNTIL MONDAY!!! A visitation and viewing will be at 9:00 am to service time at 11:00 am, Monday, October 7, 2013 at the Rooks Funeral Home at Eagle Butte, with the Rev. Sam Owen officiating. Committal services will take place at 1:30 PM, Monday, at the Eagle Butte Community Cemetery. Funeral arrangements have been placed in the care of Rooks Funeral Home of Eagle Butte.

The family of Curtis Chasing Hawk created this Life Tributes page to make it easy to share your memories.

Curtis A. Chasing Hawk, 60, of Eagle Butte, entered the Spirit...