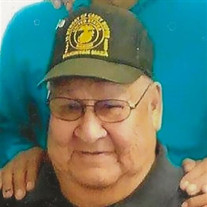 Dear Cheyenne River Lakota Oyate Family, the following funeral service information is for your prayerful concern: Dannis Delbert Burgee, “Tatanka Maka Akan Kpaya” (Buffalo That Lays On The Ground) age 78, of Eagle Butte, SD, passed away November 6, 2019 at his home in Eagle Butte. He will be laid to rest at the Buffalo Cemetery near his Grandma Mollie (Dupris) Rivers. Wake services will begin at 7:00 PM, Thursday, November 14, 2019, at CRST Bingo Hall, Eagle Butte. Funeral Services will begin at 10:00 AM, Friday, November 5, at the CRST Bingo Hall, with Minister Helen Circle Eagle, Valerie Curley and Shirley Dog Eagle officiating. Following a luncheon, burial will take place at the Buffalo Cemetery, at Cherry Creek turnoff of Hwy 63. Dannis “Danny” was born October 22, 1941 in Dupree SD to his parents Eugenia L. Annis Burgee and Dennis T. Buffalo; he was adopted by Robert (Bob) Burgee. He attended school in Dupree until the 8th grade, and then attended high school at Flandreau Indian School until 11th grade. He then returned to Dupree and graduated. In December of 1960, he joined the Navy USNR, Boot Camp in San Diego, CA. He was assigned to the carrier USS Handcock, where he was stationed in Japan for 2 years 3 days and was honorably discharged in September 1962. He played Basketball on the ship the team and played in several tournaments. He said this was one of his greatest achievement while he was in the service. Out of 3,500 men he was the only Native American on this ship at that time. After his honorable discharge he returned home to Eagle Butte and went to work for Jack & Jennie Hunt. He signed up for relocation and went to Dallas Texas for 11 months to attend Barber School and graduated December 1966. He received his license to cut hair and was a barber from 1966 to 1972. He then went to work for the Dallas Power and Light Company working on high-line wires from 1972 to 1973, and later went on to work for the Santa Fe Railroad company working as a brakeman. He was transferred to the engineer department, where he underwent the one-year intense training program to be a railroad engineer. He was responsible for handling the Santa Fe 185-mile route from Cleburne, Texas to Gainesville, Texas. He worked for the Santa Fe Railroad from 1973-1976 and considered it to be one of the highlights of his life. In June of 1966 he met and married Hilda Bagola and to this union two daughters were born, Carmen & Tammy. They lived in Dallas Texas, and after 11 years they moved to San Jose CA, where they resided from 1976-1981. They moved to Fort Lupton Co for one year then they moved back to Eagle Butte. He worked for the Indian National Finals Rodeo as a chute boss from 1979-1989. He began working for the CRST Property and Supply until he retired and has remained in Eagle Butte until his passing. As a young man he began riding saddle broncs, but then realized it was not his forte and hung it up. He then began dancing northern traditional style, and after two years he mastered this dance and became a champion dancer throughout the United States. His favorite past time was watching the CEB Basketball teams, Bowling, Rodeos, Horse Races and Pow Wow’s. He loved to razz people and make them laugh. He loved his grandchildren with deep devotion, and always gave a helping hand to those in need. His love, laughter and awesome humor will be greatly missed by all. Dannis is survived by his daughters, Carmen (Rocky High Elk) Burgee, Tammy Burgee, Sisters; Kathy McPherson, Jerilyn Burgee, Dena (Slyvester) Waloke, Faith Buffalo, Two Brothers; Van Buffalo, Nineteen grandchildren and twenty-six great grandchildren; Aunts; Margaret (Annis) Eaglestaff, Colleen Clown, and one Uncle; Ed Widow, Sr. Dannis was preceded in death by his parents; Eugenia (Annis) Burgee, Dennis T. Buffalo, Robert (Bob) Burgee, maternal grandparents; Mary Mollie Rivers, Floyd Annis: paternal grandparents Guy Buffalo, Emma Buffalo; two brother’s Jae Seay, Bryon Buffalo, grandson; Beau Kaden James Funeral arrangements have been entrusted to Rooks Funeral Home of Eagle Butte, SD. Kindly, Charlie Rooks charlesrooksfuneralhome.com

The family of Dannis "Danny" Burgee created this Life Tributes page to make it easy to share your memories.