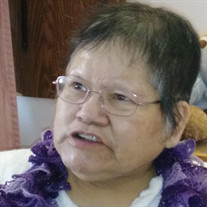 Dear Cheyenne River Lakota Oyate Family, the following obituary information is for the Debbie Keith funeral services: Debbie J. Keith-Chapman, age 63, of Eagle Butte, SD, entered the Spirit world on Friday, April 5, 2019 at Prairie Hills Nursing Home in Rapid City, SD. Debbie Jean Keith-Chapman was born May 24, 1955 at Eagle Butte to Sidney and Shirley (Swan) Keith. She was an enrolled member of the Cheyenne River Sioux Tribe. A good amount of her life was living in Rapid City, SD. For a while, due to her ailment, she stayed at an assisted living facility in Sturgis, SD. She was later transferred to Prairie Hills Nursing Facility in Rapid City. It was while there, when she was surrounded by her family, that she begins her journey home to the Spirit World. She is survived one brother, Austin Keith of Rosebud, SD; five sisters: Alta Hertel and Sydney Claymore of Rapid City, Janet Collins of Eagle Butte, Geri Kennedy of Omaha, NE and Sandy Keith of Bismarck, ND. Numerous nieces, nephews and cousins. Wake services will begin at 7:00 PM, Thursday, April 11, 2019 at the CRST Bingo Hall in Eagle Butte, with Deacon Harold Condon officiating. Funeral Services will begin at 10:00 AM, Friday, April 12, at the CRST Bingo Hall, with Matt & Margie Uses the Knife officiating. A Traditional Lakota Service send off will be offered by Harold Miner and nephews. Burial will take place at the Eagle Butte Community Cemetery. A luncheon will follow at the CRST Bingo Hall. Funeral arrangements have been entrusted to Rooks Funeral Home of Eagle Butte, SD. Kindly yours, Charlie Rooks Funeral Director

The family of Deborah Keith-Chapman created this Life Tributes page to make it easy to share your memories.