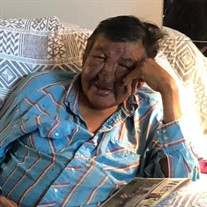 Delwayne D. "Poncho" Larrabee was born on March 24, 1967 to Benjamin & Bernice (White Dog) Larrabee in Eagle Butte, South Dakota. He was raised in the west end of the Green Grass Community area, by his parents and grandparents, near his grandma Marion's log cabin, which is where he called his home. Poncho lost his mom at a young age, Grandmother Marion cherished her grandsons as she looked over them and guided them. Poncho attended school up to the 11th grade at the Cheyenne Eagle Butte. "Poncho" played basketball in high school, and he even had his share of involvement with saddle bronc riding; his love for horses made him grow into an expert horseman. Whether it was working out a horse by taking long rides, training a horse, jockeying a horse or just simply riding for pleasure. You could always call upon Poncho to help during the fairs and rodeos throughout the northern region, he who would join the circle of Lakota men who are known for their relationship with the Sunka Wakan. Poncho was close to his Auntie Veltina. He helped her, he was devoted to assist whenever she needed help by maintaining a herd of Lakota quarter horses. It was a small herd but it gave him purpose, he respected and honored horses as sacred beings. In our Lakota culture Poncho was a "real hand". After years of his families' fading, and with limited support, he continued to strive in working in areas that people ask of him. He is kind hearted and generous. He always welcomed his friends and family to his home. He became an excellent cook made sure his guests were fed. He helped the St. John's Episcopal Church with their programs and in the Soup Kitchen. Poncho left us on Saturday morning, October 23rd, 2021 at 12:23 a.m. at Avera-McKennan Hospital in Sioux Falls, S.D., leaving our world to journey on. Toksa Ake “We will meet again”. Poncho is survived by his brother Loren Larrabee Sr. and sister Kimberly Larrabee, He was preceded in death by his parents, Benjamin & Bernice Larrabee, sisters: Connie (Larrabee) Clown, Linda Looking Horse and one brother, Richard Larrabee, Sr. Grandparents, Martin & Marion Egna, Abraham White Dog and Sullivan & Sophie Larrabee.

Delwayne D. "Poncho" Larrabee was born on March 24, 1967 to Benjamin & Bernice (White Dog) Larrabee in Eagle Butte, South Dakota. He was raised in the west end of the Green Grass Community area, by his parents and grandparents, near his grandma... View Obituary & Service Information

The family of Delwayne "Poncho" Larrabee created this Life Tributes page to make it easy to share your memories.