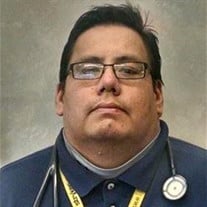 Dondi Lynn Frazier, (Isna Kutepe), 42, of Eagle Butte, SD, started his journey to the spirit world on 11/24/2014 at his home in Eagle Butte, SD Dondi was born March 20, 1972 in Eagle Butte, SD, to the late William Frazier and Inez Eagleshield of Bismarck ND. He graduated from Mobridge High School in 1991. He had a lifelong love of working in the medical field. He was an EMT for many years and was working toward becoming a paramedic. He made many friends amongst his co-workers, patients and most everyone who was fortunate to meet him. He had a sense of humour that made being around him in any capacity a lot of fun. Many humorous stories about him can be told. He also enjoyed cooking and he was good at it. He was a very compassionate man, always willing to give a helping hand. That’s what he is remembered for. Although he had only one daughter he loved children, especially babies. He was also a very talented artist. Whatever he drew, it told a story and is remember for all his art collected. He enjoyed many sports, especially football and wrestling. Due to injuries in high school he couldn’t participate. He was very good with all the technical gadgets he could get his hands on – phones, computers, cameras, etc. He was always taking pictures and had quite a collection which was very good. He is survived by his daughter, Courtney Frazier, Bismarck, ND, mother, Inez Eagleshield, Bismarck, ND sisters, India Frazier, Sara Frazier and Fanchon Frazier, all from Bismarck, ND and sister Abbi Frazier, from Parker, AZ. He also had his Godsons, Jace and Justin Yellow Fat, Parker, AZ and his Godfather, Joe Mountain, White Shield, ND and special friend – Michelle Hermann, Eagle Butte. There was one little boy who was very special to him, Aaden Huber, Wishek, ND who called him Papa. He had a large extended family from his mother and father, so many people who loved him. He was preceded in death by his father, William Frazier, his maternal grandparents – Jeanette Two Hearts and Ernest Eagleshield and paternal Grandparents – Mazie Thompson. A one night wake service will begin at 7:00 PM, Monday, December 1, 2014 at St. John's Episcopal Church at Eagle Butte. Funeral Services will begin at 10:00 AM, Tuesday, December 2 at The Old Agency with Mother Margaret Watson officiating. A dinner will follow services and then burial will take place at the Emmanuel Episcopal Cemetery, White Horse, South Dakota.

The family of Dondi Lynn Frazier created this Life Tributes page to make it easy to share your memories.