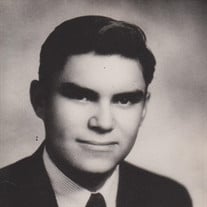 Douglas Knight, age 85, entered the Spirit World on Sunday, April 26, 2015 at the Cheyenne River Health Center at Eagle Buttle, SD A one night wake begins at 7:00 PM, Thursday, April 30, 2015 at the Sacred Heart Catholic Church in Dupree, SD. Mass of Christian Burial will begin at 10:00 AM, Friday, May 1, 2015 at the Sacred Heart Catholic Church, with Rev. Dan Juelfs officiating. Burial with full military honors will follow at the Dupree Community Cemetery. Douglas Wallace Knight was born February 6, 1930 to Wallace and Sarah (Inamongst) Knight at home. Doug spent his early years on different ranches where his father Wally worked. In 1937 Wally and Sarah moved the family to Ash Creek where they started their own ranching operation. Doug attended grade school at the Little Ireland country school and the Cheyenne River Agency boarding school. He spent all four years of high school at Dupree Public School graduating in 1949. While in high school Doug played football and basketball. He is well remembered by his classmates and family as one of Dupree’s top basketball players of his day. After graduation Doug worked for his dad on the family ranch and was part of Wally’s dam building crew until 1951 when he enlisted in the navy. While in the navy Doug served as a machinist on the USS Baltimore and was stationed in Boston MA. One of the highlights of his navy career was getting to see the Queen of England. He also met a young lady by the name of Marjorie Sullivan whom he fell in love with. He and Marge got married January 16, 1954 in Boston, Massachusetts. Doug was honorably discharged from the navy on August 19, 1955. He then moved back to Dupree with his new bride where they set up their home. In 1956, with the help of his dad Wally, his brother-in-law Junior Steen, Gene and Charles Steen, he built a house on Little Cottonwood creek, started ranching and started his family. Doug and Marge had 3 daughters, Karla, Karan and Kathy Sue and they became his “cowboys,” helping him put up hay, doing the fencing, gathering cattle and running wild horses for their grandpa. It is unknown to anyone where he learned to fly a plane, while in the service or if his friends Rollie Eulberg or Mitch Chapelle taught him but Doug was able to fly a plane. He once took his brother Jess and his nephew Tom with him as he flew looking for Wally’s buffalo. The trip was cut short when Jess got sick in the plane and Doug had to take his passengers back and kick one of them out. He then had to fly solo and find the buffalo on his own. He was a big kid at heart and loved teasing and playing jokes on people. In the early 60’s he worked for the tribe, planting trees. In 1965 he went to Texas and worked for Rock Cowan as a ranch hand during calving season. He came home and started selling Watkins until around 1967 when he got a job as a night watchman for the Swiftbird Job corp. He then went to work with the BIA Plant Management working at all the reservation day schools, keeping them up and running. He continued to work there until his retirement in 1990. Doug rodeoed for a short time and competed in calf roping, team roping and later old man’s breakaway roping. He would take his family on vacations back east to visit Marge’s family and her family would come out to visit them. One family vacation was to Canada where they went to the Calgary Stampede. This became an annual event for Doug until health problems kept him from going. He made it a point to travel to the states and he made it to every state, the last being a trip to Hawaii, which he said he didn’t care for. As an old tough cowboy Doug didn’t believe in running to a doctor every time something ailed him or didn’t seem quite right. This attitude didn’t help him in his later years when those “little things” became bigger issues as his health started deteriorating. For the last two years of his life he was bedridden. The family kept him home where they learned and continued to take care of him along with his home health care nurse, Bobbie Ducheneaux Pearman whom they will be forever grateful to. As Doug’s health issues worsened he was removed from the home and taken to a hospital in Bismarck, ND. When it was determined there was nothing more they could do for him, Doug, upon his wishes was transported back to IHS hospital in Eagle Butte where he could spend his last days close to family and friends. Doug began his journey to the spirit world on Sunday April 26, 2015 at the IHS hospital in Eagle Butte, SD where he was surrounded by family and friends. Grateful to have shared in his life are his children Karla and Karan of Dupree, SD, Kathy of Wall, SD, 8 grandchildren Ed, Ben, Danny Marshall, O’Lowan (Chris) Jeffries and Alisa Marshall, Cory, Kalin and Kristie Ann Knight, 18 great grandchildren, his sister Nadine Cook and brother-in-law Duffy Cook, Covelo, CA sister-in-law Edith Knight of Dupree, SD, numerous nephews and nieces. Preceding him in death were his wife Marjorie, his parents Wallace and Sarah Knight, sisters Lucile Knight and Lila (Albert) Steen, brothers Jess and Louie, nephews Jeff Knight and Cody Cook, nieces Jill and Judy, his father-in-law Carl Sullivan, mother-in-law Ruth Pickering, sister-in-law Ruthie. Funeral arrangements have been entrusted to the care of Rooks & Annis Funeral Home of Eagle Butte, SD Online condolences maybe offered at rooksfh.com and Rooks & Annis Facebook page.

The family of Douglas W. Knight created this Life Tributes page to make it easy to share your memories.