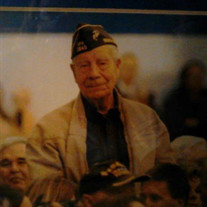 Eugene Buechel Rooks entered eternal rest on Monday, May 18, at the VA Hospital in Hot Springs, SD. He was 92. “Gene” was born on June 28, 1922 in Rosebud, SD, and was the second child born in the newly completed Rosebud Hospital, and was the youngest of 12 born to Charles and Anne Rooks who ranched near Red Stone Basin and Bear Creek areas near Wanblee, SD. Dubbed “Little Coyote of the Badlands,” Gene grew up “cowboyin” around the Badlands, and recalled chopping winter ice on the creek to water cattle when he was ten years old. He also remembered a time he followed his horse in from a blinding blizzard with the horse’s tail braided around his fingers. After graduating from St. Francis High School in 1941, “Gene” hopped a freight train near Chadron, Nebraska. With his buddy, Tommy Tibbitts, they rode the rails to Casper, Wyoming where he enlisted in the Marine Corps. During his three years in the Pacific theatre, Gene fought with the 4th Regiment, 2nd Marine Raider Battalion on campaigns such as Emirau Island, Guam, Tarawa, Okinawa, and Guadalcanal. He was also part of the 1st Marine Expeditionary force to come ashore at Yokusoko, and witnessed the formal surrender of the Japanese on the USS Missouri in Tokyo Bay. After mustering out on Christmas Day, 1945, Gene majored in English at Arizona State University, where he met his first and only love, Willie Mae Roland. They were married 54 years before his lovely bride passed away. To this union were born three daughters, Theresa, Deborah, and Kimberly; and four sons, Charles, James, David, and Michael. As a Native American businessman, with his wife, Willie Mae, Gene founded and operated four successful businesses in the Pine Ridge community: Taco Debi’s, Western Auto Hardware, Pow Wow Café & Sioux Funeral Home. Though a quiet and reserved man, Gene befriended many with loyal generosity. He helped establish Alcoholics Anonymous meetings on the Pine Ridge Reservation in 1966. He also served as a tribal councilman representing Pine Ridge Village from 1978 to 80. At 92, he enters Paradise as a humble and obedient son of the Catholic Church, readied by prayer and suffering to meet his Lord and Savior Jesus Christ. Mr. Rooks is survived by four children: Theresa Nieschulz, Phoenix, AZ; Charles (Rose) Rooks, Rapid City, SD; David (Sandy) Rooks, Rapid City, SD; Michael (Sue) Rooks, Oral, SD and Kimberly (Scotty) Crawford, Hot Springs, SD; 25 grandchildren and 18 great-grandchildren. He was preceded in death by his father, Charles, his mother Anne, his brothers Charles Jr., Jacob, Stanley, unknown (died at birth), Frank, and Bill; and by his sisters Leah, Zona, Evelyn, Emmaline, and Andrea. He was also preceded in death by his wife, Willie Mae (Roland), a daughter, Deborah, and a son, James.

The family of Eugene B. Rooks created this Life Tributes page to make it easy to share your memories.