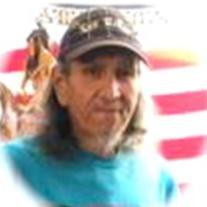 Gilbert “Ernie” New Holy, Sr., was born Sept. 29, 1954 in Rosebud, S.D., to Adeline Cook and Pedro Whipple. He attended grade school at Norris School in Norris, S.D. He attended high school at Todd County High School and also Brainard Indian School. He played baseball with various teams from the Rosebud Reservation. He made it to the National finals. Ernie moved to Montana in the early 70's where he worked as a police officer for 13 years. He also did some fire fighting. From the years living in Montana, he had seven children; "EJ", Sharla, Vine, Rusty, Terri Lynn, Erin and Rea. He started singing in Pow-wows during the 80's and traveled with many drum groups, eventually making his way back to Rosebud Reservation to learn more about traditions. During this time, he sang with a lot of Lakota drum groups around the reservation. He decided to start his own drum group in 1996, forming the “Leca Wakan” drum (New Holy), in honor of his grandfather, Frank New Holy. He wanted to run his drum in a traditional way to help the people who needed a drum. He ran this drum for 15 years, composing many songs for pow-wows and honoring songs for the Oyate. Ernie and the Leca Wakan drum have always been there for anyone who asked them them to be. In 2005, Ernie met the love of his life, Shanna Turney, of Wanbli, S.D. On June 28, 2009, Ernie and Shanna joined in a traditional Lakota ceremony at the Corn Creek Sundance. Ernie and his “Lady” made their life together at his last home of 16 years at Sunrise Apartments in Mission, S.D., until his departure on Aug. 14, 2012, at Sanford Hospital, Sioux Falls, S.D. He is survived by his wife Shanna Turney. Three sons: Vine Tall White Man, Montana; Ernest “EJ” New Holy Jr.; and Rusty Tall White Man of Mission. Four daughters: Erin New Holy, Pierre; Rea New Holy; Terri New Holy; and Sharla Medicine Flying all of Montana. Three brothers: Drury Cook, Switzerland; Terry New Holy, Corn Creek; and Bruce Cook of Corn Creek. From his fathers side: Clariss & Richard Young; Sandra & John Guerue; Alvin Whipple; Cheryl Whipple; Jason Whipple; Daryl Whipple Sr.; Mary Whipple; Roger & Carol Whipple. He is preceded in death by his parents: Pedro Whipple and Adeline Cook; sister, Gwen Cook and brother Melvin Whipple. A two-night wake will begin at 11:00 AM Saturday, August 18th 2012 at the Sinte Gleska Multipurpose building in Antelope. Dinner and giveaway to start at 10:00 AM Monday. Funeral Services will begin at 2:00 PM Monday, August 20, 2012 at the Sinte Gleska Mulitpurpose building. Mr. Stan Red Bird will be conducting services. The family would like to extend and invitation to all drum groups that would like to attend at it was Ernie’s joy to sing. Burial will follow at Holy Innocents Catholic Cemetery in Parmelee.

The family of Gilbert "Ernie" Ernest New Holy created this Life Tributes page to make it easy to share your memories.