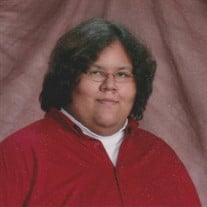 JOEL GIDEON STARS (age 27) Tawacin Waste Wicasa (Good Hearted Man) With his family by his side, Joel Gideon Stars passed away unexpectantly and stepped into the open arms of Jesus on August 9, 2014 at Avera St. Mary’s Hospital in Pierre, SD. Joel was born on July 21, 1987 in Pierre, SD to Donald Sr. and Bernadette (Bernie) Stars. Joel was raised in Pierre and attended Buchanan Elementary, Georgia Morse Middle School and proudly graduated from T.F. Riggs High School in 2005. His previous employments were at the Pierre Boys and Girls Club, Pro Image, Dakota Emporium, GNC, Kmart, and on September 17, 2012 he found his dream job of working with children at the Pierre Indian Learning Center and was looking forward to starting another year. He loved how the children were non-judgmental which made his work fun. While working at Kmart he met a lot of people and some he bonded with especially one of his many special Aunts, Dorothy (DohDoh) White-Emery. Joel’s favorite food was Indian Tacos and if it was up to him he would have his mom make frybread three times a day. Joel loved to sing and was in high school chorus and got a kick out of Mr. Johnson the choir director. Those that knew him knew that he was an avid sports fan which brought him to enjoying one of his jobs as an umpire. For some reason his calls as an umpire were never argued or questioned. During his baseball years he was told to quit because he would probably get hurt, but if you knew Joel, obstacles in his life never made him a quitter. Upon reaching high school years he played football all four years and was proud to be a Pierre Governor! In his spare time he loved to play video games and was a master of every kind. He was bi-lingual and spoke Japanese because of his dedication to Anime Games. Joel enjoyed doing sports writing for his friend Matt and the Dakota Radio Station FM. His favorite sports teams were the Minnesota Vikings, New York Yankees, Duke Blue Devils and of course the Pierre Governors. He was a loyal Pierre Governors fan and very rarely missed a Governors game. If there was ever a question or argument about sports he would be the first to kindly set you straight. He also participated in Youth Little League Baseball and Men’s softball. His love of working with young children found him coaching Lions Football League from 2005-2007 and recently helping with the Pierre Indian Learning Center teams. Joel’s sisters play softball and he was their number one fan and of course he was an awesome scorekeeper! Joel loved to Frisbee Golf with his siblings and friends and when he won he would make sure that they knew he beat them. He was a fan of World Wrestling Federation/Entertainment and when he was young he would empty his mom’s dish towel drawer to make his own wrestling outfits. Joel also made his appearance on the “big screen” in the movie Dust of War in 2013. Another of Joel’s greatest love was his niece Laila Stars and to her was known as “Uncle Joey” and on her visits he made a good patient for her while she practiced her nursing skills and was an excellent tea party guest. Laila made sure he could have a conversation with her about her favorites and so many times he could be found watching “Dora the Explorer” with her. One of Joel’s recent enjoyments was boating on the river with his dad and siblings. Their first boat ride together found them caught in a storm and upon returning home he told his mom, “I got to get in the shower, people talk of being a raisin, well I feel like a wrinkled prune”. He was looking forward to being on the planning committee for his 10 year school reunion and couldn’t believe that it was going to be 10 years since he graduated. Joel was grateful for having shared his life with many including his loving parents Donald Sr. and Bernie Stars and with his siblings Jered, DJ, Alana, Erin and very special niece Laila Stars. Joel is survived by his Grandmother Opal Stars. Surviving uncles are Dr. Lorenzo Stars, Leonard Beare, Jesse Andrews Jr. and Wes Andrews. Surviving aunts are Juanita Cheryl Beare (Jose), Pamela Stars (Randy), and Lisa Stars (Rod). Joel found true friendship in his best friend Kevin Fahey. T.F. Riggs Class of 2005. Proceeding Joel in death were his Grandfathers Joseph Stars Jr. and Gideon Beare. Grandmother Donna Andrews Beare. Great grandparents Joseph Sr. and Belle Stars, Rev. Charles and Blanche Marshall, Jesse Sr. and Mercy Andrews, Rueben and Fannie Beare. Uncles Jeff Beare, Bernard Beare. Like he, his aunt Helen Andrews was a Minnesota Viking fan and now the both can cheer together. Taken from one of Joel’s recent facebook posts is a good example of how his view on life was: And that puts the 2014 Milks Camp powwow in the books. No matter what’s goin on in my life good or bad, I know that here I’ll always have a good time. This will always be my home away from home. Much love… On Saturday August 16, 2014 a Memorial Service will be held in Pierre, South Dakota at the Community Bible Church (1516 N. Harrison). Visitation beginning at 2:00 pm CST and Memorial Service beginning 4:00 pm CST. Following services refreshments will be served. On Sunday August 17, 2014 will be an all night wake at the Bonesteel City Hall (Bonesteel, South Dakota). Funeral services will be at 2:00 pm CST at the Bonesteel City Hall in Bonesteel, South Dakota with burial at the Ponca Creek United Church of Christ Cemetery. In leau of flowers the family has requested any donations be made to the Joel Stars Memorial Fund via Wells Fargo Bank, Pierre, SD. Rooks Funeral Chapel of Mission, SD has been entrusted with arrangements.

JOEL GIDEON STARS (age 27) Tawacin Waste Wicasa (Good Hearted Man) With his family by his side, Joel Gideon Stars passed away unexpectantly and stepped into the open arms of Jesus on August 9, 2014 at Avera St. Mary&#8217;s Hospital in Pierre,... View Obituary & Service Information

The family of Joel Gideon Stars created this Life Tributes page to make it easy to share your memories.