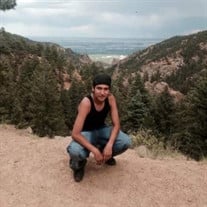 Justin William Reede-Walking Bull was born December 8, 1996 at Rapid City, South Dakota. Justin was always on the go. It was his way to make everyone he met smile or laugh. Justin always had a kind heart, and he couldn’t stand to see someone sad or hurt. Everyone that met him commented on how kind he was. If something came to Justin, it was act now and deal with everything else later. We were told a story the other day that someone at the LTM had requested carryout. Justin grabbed the groceries and followed the person out. The person kept walking until they got home, and so did Justin with the person’s carry out food. This was the kindness he showed even to a stranger. Justin had a son on January 21, 2021. He couldn’t be prouder. Justin has always been good with children and would have made the best father to his son. Justin made the trip to the other side before his time and will look over his son and family until it is our time to join him. WE LOVE YOU, SON, whole bunch, too much always and forever, always have always will, we do, we do! Justin is survived by one son, Jre’Vian Reede of Dupree. His parents, Jeremy and Nicollete Reede of Dupree, four brothers, Ty Reede and Kole Reede of Dupree, Garrett Walking Bull and Gary Walking Bull, Jr. of Aberdeen, SD. Two sisters, AriAnna Reede of Dupree, and Loverine Walking Bull of Aberdeen. Maternal Grandmother, Gerti Lafferty of Iron Lightning, SD and paternal grandparents, Larry and Mary Reede of Dupree. Justin was preceded in death by his biological father Gary Walking Bull Sr, Paternal Grandparents Leslie Ross and Georgianne Walking Bull, and his Great Grandmother Ruth Walking Bull. A wake service begins at 7:00 PM, Sunday, February 28, 2021 at the Pioneer Hall at Dupree, SD. A funeral service will begin at 10:00 AM, Monday, March 1, 2021 at the Pioneer Hall, with the Rev. Kurt Huber officiating. Burial will will follow at the Iron Lightning Cemetery, Iron, Lightning, SD. The Drum Group, Wakinyan Maza - Iron Lightning Singers, are providing the traditional Lakota music.

Justin William Reede-Walking Bull was born December 8, 1996 at Rapid City, South Dakota. Justin was always on the go. It was his way to make everyone he met smile or laugh. Justin always had a kind heart, and he couldn&#8217;t stand to see... View Obituary & Service Information

The family of Justin W. Reede created this Life Tributes page to make it easy to share your memories.