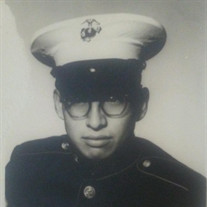 Kenneth D. Curley, age 63, of Iron Lightning, SD, entered the Spirit World on Friday, September 21, 2018 at Rapid City Regional Hospital. A funeral procession will gather at the Four Mile Junction at 4:00 PM, Thursday, September 27, 2018 and process to the Old Agency Building where a one-night wake will be held and prayer services beginning at 7:00 PM. Funeral Services will begin at 10:00 AM, Friday, September 28, at the Old Agency Building with Ms. Iva Traversie and Ms. Valerie Curley officiating. Traditional Lakota Services will be offered by Mr. Ivan Looking Horse and Mr. Aaron Widow. After a luncheon, burial with full military honors will follow at the Fool Dog Cemetery at Iron Lightning. Kenneth Curley was born March 9, 1955 at the Old Cheyenne Agency to Cecil and Amy (Iron Lightning) Curley, Sr. In his early years he attended school at the Old Agency, later in CEB, as well at the YACC in Mobridge and he later received his GED at SIPI at Albuquerque, NM. In September of 1973, he enlisted in the United States Marine Corps and his tour of duty he was honorably discharged. After the military service, Kenneth worked in various jobs with Deb Knight and the late John Hollow Horn. In 1991 he relocated to San Jose, CA where he began his journey on the road to sobriety at the Mato Ska Treatment Facility, and while there he was very instrumental in forming the Mato Ska drum group. In 1999 he returned to South Dakota where he resided in the Lakota Homes community, and over the years he became involved in veterans honoring functions and he traveled far and wide to participate in these veteran activities. He is survived by his lifelong special friend, Sharon Brings Plenty of Rapid City. Four daughters: Tessa Curley, Jean Good Shield and Rylene Good Bear of Rapid City, SD, Lonna Joshua of McLaughlin, SD. Five brothers: Cecil Curley, Jr., Myron Curley, Irving Curley and Danny Curley of Eagle Butte, SD, Keith Curley of Cherry Creek, SD. Five sisters: Linda Addison, Amelia Curley, Melissa Jewett, Ethelene Curley and Joan Curley of Eagle Butte. 11 Grandchildren and 3 Great Grandchildren. Rooks Funeral Home of Eagle Butte, SD is honored to be of service to the Kenneth Curley Family.

The family of Kenneth Duane Curley created this Life Tributes page to make it easy to share your memories.