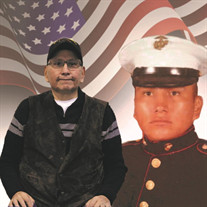 Our Beloved Hoikiya, Kenneth G Little Thunder was born on September 6, 1958 to Gilbert Little Thunder and Elizabeth Chasing Hawk. After Elizabeth passed away Gilbert married Eunice Thunder Hoop. Upon this union, along with Ken, Harry, Iris, Ida, Delora, Olivia, and Mia were born. Ken attended Red Scaffold School from first grade to sixth grade. Transferred to Eagle Butte school from 7th-12th graduated in 1976. After High School graduation, Ken attended Black Hills State College in Spearfish SD during this time he was blessed with his firstborn son, Terrance Little Thunder. In 1981, he then left school to answer his higher calling, and joined the US Marine Corp Second Battalion 7th Marines Boot Camp in Camp Pendleton, CA. He was then stationed in Guantanamo Bay/Cuba Barracks Duty. Ken was then stationed in Okinawa, Japan until he was honorably discharged as a Corporal expert in riflery in May of 1984. Ken returned home to Red Scaffold, SD and married Hildred Waloke. With this union, Felicia Lynn Little Thunder and Kent Levi Little Thunder was born. He supported his family by working at Lynn’s Super Value Mart for 4 years in Faith, SD. He then moved to Rapid City, SD in June 1985 to August 1986, Ken worked in Black Hills Forestry Service. In 1990 to 1992 he worked at Black Hills Meat Packing Plant. In 1993 to 1996 he worked at Black Hills Custom Packaging Systems. In 1994, he was blessed with his third son, Samual Eagle Staff. Later Ken attended Western Dakota Technical School and received his Accounting degree in 2002. He then worked at Western Dakota Technical School as an Accountant for 2 years before moving back to Takini School in September 2004 where he worked as a Para-professional. August 2005, he married Bernadine LaClaire-LittleThunder, in this union he gained two children Will Laclaire and Misti LaClaire Nayares they then made their home in rural Red Scaffold, SD. While working at Takini School he was the High School Assistant Basketball Coach and was also a part of the 2008 District Championship. Ken was also the Takini Drum Group Leader and the Lakota Language Teacher until 2011. In 2011-12, he then worked for the BIE as a Lakota Language Teacher at Cheyenne-Eagle Butte Primary School. In 2009-2010, he shared his voice in the Lakota version of The Berenstein Bears as Leksi Freddy. He was also an active participant with the Lakota Language Consortium, helping with the development of the online Lakota language Dictionary. The 2012, Ken went back to Takini School as a High School Lakota Language Teacher. In 2014, he became the Cheyenne River Sioux Tribe’s Administrative Officer under Chairman Harold Frazier Administration until he passed. Ken began his battle with Pancreatic Cancer in May 23, 2019. He received several bouts of chemotherapy treatments until he took his last breath March 22, 2020 in Rapid City, SD. Ken spent many summers in Fish Creek, SD with Unci Ida Scatters Them-Little Thunder then while his ate’ worked at Red Scaffold Day School, Ken spent time with Unci Ruth Yellow Hawk-Thunder Hoop. He lived his life like a true and proud Marine to the very end. He made sure everyone knew cancer was not going to get the best of him. He showed great strength and positive attitude. He was a Sundancer and believed so much in the Lakota culture, saying “I believe in what the spirits say.” He was a strong believer in being Wolakota and having a strong family kinship. Ken was a humble and very intelligent man, loving father, brother, uncle, and grandfather. His accomplishments set the bar for his children and grandchildren to reach for their dreams. Ken Little Thunder will be forever held in our hearts and not forgotten. Until we meet again Ho Ikiya… Ken is survived by his loving wife Bernadine LaClaire-Little Thunder and three sons: Terry Little Thunder, Kent Little Thunder, and Samual Eagle Staff and one daughter Felicia Little Thunder; stepson Will LaClaire and stepdaughters Misti LaClaire Nayares and Karen; grandchildren: Arrow, Stormie, Axel, Xael, Violet, Wanbli, Tasina, Teton, and Tokala and great grandchildren: A’aliyah siblings: Harry Little Thunder, Iris Little Thunder, Ida Little Thunder, Delora Marrowbone, Mia Little Thunder, and Olivia Little Thunder. Cousins: Glenda Thunder Hoop, Geraldine, Valarie, and Stephanie Charging Eagle. And all his nieces and nephews. Ken was preceded in death by his parents: Gilbert Little Thunder and Elizabeth Chasing Hawk and stepmother Eunice Little Thunder; one niece Ruth Blair Marrowbone; brothers Tom Charging Eagle and Aaron Widow.

The family of Kenneth G. Little Thunder created this Life Tributes page to make it easy to share your memories.