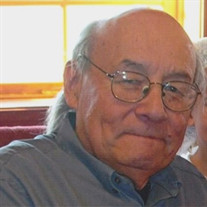 Leland Miles Bordeaux passed away in Sioux Falls, SD, in the early morning hours on Friday, August 15, 2014 at the age of 76. Leland was born on April 15, 1938 to Evelyn (Wright) and Vernon Bordeaux at the Rosebud Hospital. He was baptized at the Calvary Church in Okreek, SD on September 4, 1938. Leland graduated from Todd County High School in 1956 as valedictorian of his class. He then graduated from Black Hills State in 1960 with a B.S Degree in Physical Science. Lionel Bordeaux stated, “Leland was known for being one of a handful of students to have earned an A in Dr. Laura Camry’s class, known as International Relations. This class was the most feared class at Black Hills at the time.” After traveling and teaching overseas in places like Tripoli, Africa and Germany; Leland came back to the place he loved, the Rosebud Reservation. Over the years, Leland taught Science in the Todd County School District and was superintendent at St. Francis Indian School. He also tutored students at the Rosebud Dormitory. At one time, Leland was the only Indian teacher in the Todd County School District, and was an early educational trailblazer for others to follow. During this time he also earned a Masters Degree in Physical Science from Washington State University(1972) and a Masters Degree in School Administration from the University of South Dakota (1980). Finally Leland found his passion for post-secondary education, and more specifically his passion as he served as Vice President, teacher, and faculty member at Sinte Gleska University. While at Sinte Gleska University, Leland represented the University at conferences like the South Dakota Indian Education Association and the National Science Foundation. He was well-known and respected by his peers in Indian Education across the country. Leland’s interests included: education, mathematics, all sports (especially Todd County volleyball, St. Francis basketball, and Packer football), collecting artwork, gardening, reading, and traveling. Leland is survived by his wife Joanne (Angel) Bordeaux, daughters Joyce (Donald) Mansell, and Jessie (Christopher) Andre, brothers Russell (Pat) Bordeaux and Richard (Jane) Bordeaux, 6 grandchildren, 8 great-grandchildren, and many beloved nieces and nephews. Leland was preceded in death by his mother, father, sister Evelyn Handboy, brothers Ron and Bob Bordeaux, and wife Rosalie (Brade) Bordeaux. Leland will be greatly missed by his family, friends, and the administration, staff, and students at Sinte Gleska University A one-night wake will begin at 4:00 PM Tuesday, August 19th at the SGU Multipurpose Building, Antelope, SD. Prayers will start at 7:00 PM. Funeral services will start at 10:00 AM Wednesday, August 20th at SGU Multipurpose Building. Services will be officiated by Rev. Don Eagle and Deacon George Medicine Eagle. Burial will follow at the Calvary Episcopal Cemetery, Okreek, SD.

Leland Miles Bordeaux passed away in Sioux Falls, SD, in the early morning hours on Friday, August 15, 2014 at the age of 76. Leland was born on April 15, 1938 to Evelyn (Wright) and Vernon Bordeaux at the Rosebud Hospital. He was baptized... View Obituary & Service Information

The family of Leland Miles Bordeaux created this Life Tributes page to make it easy to share your memories.

Leland Miles Bordeaux passed away in Sioux Falls, SD, in the...