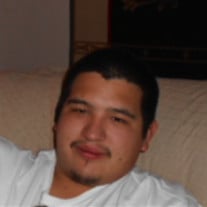 Lester “Beau” Peneaux, 23, entered the Spirit World Saturday, August 31, 2013 at Rapid City Regional Hospital. Lester Beau Peneaux was born to Darla Strong Heart and Lester Peneaux on August 3rd, 1990 in Pierre, SD. Lester grew up in the Eagle Butte community where he attended school in Cheyenne Eagle Butte and graduated in 2009. While in high school, he excelled in basketball and played as a freshman through his senior year. He was also the guiding force behind the Lakota Youth Movement (LYM), which focused Lakota youth on striving for perfection through positive Lakota Values. Throughout the summer months during his high school years, he was employed at the Black Hills Forestry Services in Rapid City. He worked various jobs and for the past two years he was employed with the Spencer Dooley Grain Bin Construction Company. Lester enjoyed traveling and seeing new places and meeting new people. Lester was proud to be a Lakota and was also a descendant of the Fool Soldier Band. He inspired a lot of people to sing, to be sober as a young person walking the Red Road on the reservation. Lester rode on the Big Foot ride. He was a very caring person and would help anyone who needed it with a song and prayer or words of encouragement. He danced at the International Sundance in Green Grass. Lester was always looking forward to the pow wow season, where he would see all his friends and fellow singers, who would love “jammin” with him. Lester will be deeply missed by his family, friends, and community; he was a beloved uncle, nephew, and son. He will be forever in our hearts. He is survived by his mother, Darla Strong Heart of Eagle Butte. Four brothers: Lawrence Earring of Pine Ridge; Mahlon Jeffries, Jared Peneaux and Trent Peneaux of Eagle Butte.; a sister, Ashley Strong Heart of Eagle Butte. He was preceded in death by: his father, Lester Peneaux, sr., grandparents: Cecil Whitesell and Hattie Pretty Bear Carter, Stanley Peneaux Sr. and Celeste Thompson-Peneaux. His uncles and cousins: Ben Brown Wolf, Joseph Brown Wolf, Karen, Carmen, LeRay, Jasper, Ronnie, Merrill Peneaux and Larry Thompson. A two-night wake will began at 4:00 PM Saturday, September 7th, 2013 at the Johnson Cultural Center in Eagle Butte. Episcopal funeral services were at 10:00 AM, Monday, September 9 at the Johnson Cultural Center, with the Rev. Mother Margaret Watson officiating. Traditional Lakota services by Mr. Arvol Looking Horse. Interment followed at the Ascension Episcopal Cemetery at Black Foot, SD.

The family of Lester Beau Peneaux created this Life Tributes page to make it easy to share your memories.