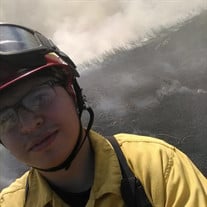 Marcus B. Antonio, age 24, of Eagle Butte, SD, entered the Spirit world on Saturday, January 12, 2019 at the Cheyenne River Health Center, Eagle Butte, SD. Wake services will begin at 7:00 PM, Monday, January 21, 2019 at St. John’s Episcopal Church in Eagle Butte. Funeral Services will begin at 10:00 AM, Tuesday, January 22, at St. John’s Episcopal Church, with Mother Margaret Watson officiating. After a luncheon, burial will follow at Sacred Heart Catholic Cemetery, Red Scaffold, SD. Marcus Bryant “Wanbli Tokahe” was born November 22, 1994 at 9:16 AM at the Indian Health Service Facility in Eagle Butte, South Dakota to Wilfred Francis Antonio, Jr. and Jonni Rae Clark. Marcus attended C-EB Schools until the 12th grade after which he acquired his GED Certificate in April, 2014. He went on to obtain certificates for Basic Carpentry Skills in May, 2015; Heavy Equipment Training June, 2017; Class FI-110 with National Wildfire Coordinating Group in August, 2018. He was also looking into joining the military as his next step in life if he wasn't able to find work locally, a move that was inspired by His Auntie Nikki, a U.S. Army Veteran, of whom he was very proud. From the very start Marcus had a beautiful, contagious smile that when he shared it with you, you couldn't help but smile back. Marcus was good natured, respectful, and humble. He was always kind to everyone he met and always had an encouraging word to those he felt needed it or even if he just wanted to share it. He always tried to help where ever he could. He was usually the voice of reason in a difficult situation. Marcus was full of life and was always game for a good time with his family and friends. He could be found dancing down the hallway calling for his family to dance with him. He loved listening to music and online gaming and enjoyed playing basketball with his Uncles when he could. He enjoyed cooking a family meal but his favorite snack was simply a bowl of popcorn with Tabasco Sauce. Marcus' father Junior Antonio instilled a strong work ethic in the boys and shared with them a love of outdoor activities such as hunting, fishing, and swimming. Junior worked mostly in construction and He would take the kids to his places of work to show them the things that he helped to build, inspiring Marcus' appreciation for carpentry and construction work. His mother met D'Boy Condon in 2001 who influenced the boys by encouraging their work ethic and confidence to do what they need to do to be hard workers. Marcus' Uncle Jay also took him under his wing as an apprentice while working jobs that included home repairs, deck building, roofing, and cutting and hauling wood. Marcus was most proud of his Grandma Benita and admired her dedication to and respect for her job. He appreciated her love for her Tiospaye and always made sure to tell her every chance he got. Marcus took all he learned and used it to try to further his position in life in a positive direction. He wanted to be someone his Sons and his younger family members could look up to and go to when needed. Marcus' second home was Grandma Benita's house where he always looked forward to and enjoyed family gatherings or just hanging out. It was usually at Grandma's house that you would find Marcus with his first best friends, his brothers Trevin and True. They could find mischief where ever they looked. The biggest moments in Marcus' life was the birth of his Sons Jaxtyn Bryant in October 2014 and Ethan Eugene Ryder in January 2016. He was especially proud of the fact that his Son Jaxtyn shared a birthday with his Dad Junior Antonio. He loved his boys most of all and wanted to be able to give them a good life. Marcus was very proud of his sisters and brothers and always made sure they were safe and taken care of. He loved all of his young cousins, nieces, and nephews like they were his own and always looked out for them in anyway he could: Ahmyli J, Keenan, Leila, Rylee Ann, Eli, Logan, Aryanna Jayde, Mila Jay, Tavian Francis ”Tavi J”, and Boston Kingsley “Boston Baby”. Marcus was extremely proud of his large Tiospaye and Tiwahe on both sides: Paternal: New Mexico: Antonio, Garcia , Chino , and Vallie; Cheyenne River Tiospaye: Eagle Staff , Bear Stops, Blackmoon, and Lone Eagle; Maternal: Montana: Brown, Lucky, Clark, and Brughier; Cheyenne River Tiospaye: Cook, Roach, Iron Lightning, and High Elk. He was always grateful for the encouragement and love he received from his family members. Marcus Bryant entered the Spirit world on Saturday, January 12, 2019 at the Cheyenne River Health Center, Eagle Butte, SD and we were all left heart broken. We will always cherish our time spent with him and the memories left behind. Marcus you are loved dearly forever and always. He is survived by two sons, Jaxtyn Antonio and Ethan Lind of Eagle Butte. His mother, Jonni Clark of Eagle Butte; one brother, Trevin Antonio of Eagle Butte; four sisters, Jennifer Clark and Danielle Antonio of Eagle Butte, Antoinette Antonio of New Town, ND and Brianna Fast Horse of Albuquerque, NM. Paternal Grandmother Marlene Bear Stops of Red Scaffold, South Dakota, Maternal Grandparents; Calvin Clark, Jr. of Wolf Point, Montana and Benita Cook Clark of Eagle Butte, South Dakota; and a very large tiospaye. He is preceded in death by his father Wilfred Antonio, Jr. and Paternal Grandfather Wilfred Antonio Sr. and cousin Baby Jay Clark.

The family of Marcus B. Antonio created this Life Tributes page to make it easy to share your memories.