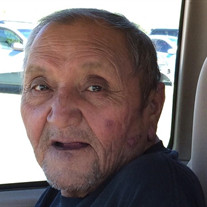 Melvin LeClaire, (Capa Gi – Brown Beaver) age 66 of Rapid City, SD and formerly of Dupree, SD, entered the Spirit World on Sunday, March 8, 2015 at his home in Rapid City. .A one night wake begins at 3:00 PM, Sunday, March 15, 2015 at the Dupree Community Building, Dupree, SD. A prayer vigil service will begin at 7:00 PM. Funeral services will begin at 11:00 AM, Monday, March 16 at the Dupree Community Building, with the Rev. Dan Juelfs officiating. Following a luncheon, burial will follow at St. Joseph’s Catholic Cemetery at Cherry Creek, SD. Melvin Thomas LeClaire was born to Vincent and Margaret Creek-LeClaire on September 09, 1948 at Old Agency, SD. Melvin attended Cherry Creek Day School and Old Agency School and Chamberlain boarding school. On October 14, 1966 he married Madeline Between Lodge. During 1970 to 1971 they attended the United Sioux Tribes Educational Technical Center in Bismark, ND and he received a certificate in Auto Body Repair. During their life together they had six children: Pierre LeClaire, Sioux Falls, SD; Myra LeClaire and Melda LeClaire and Lauree LeClaire all of Rapid City, SD ; David LeClaire Sr., Rapid City, SD and Dustin Condon, Sioux Falls, SD. Melvin was employed by the BIA Roads Department and he was an Engineering Equipment Operator for years until he retired in 1989. Melvin and Madeline made their home in Dupree and Eagle Butte until 1989 and moved to Rapid City, South Dakota. Melvin then moved to Duluth MN in 1990 and moved back to Rapid City in May 1992 when his grandson Lee Thomas Sr. was born and continued to live in Rapid City at the time of his death. He raised his grandson Lee as his own son and he also raised his grandsons Harold and Louis Jr. as well. He was currently raising his grandsons Issiah and David Jr. Melvin wanted all boys to carry on his name but he got them all thru grandsons. He was very proud of all his grandchildren. Our Dad was an excellent father,a good and loving grandfather,caring brother and uncle and friend. He was a teacher a jack of all trades. When people who knew him would have a question especially about cars they would come to Dad and ask him. Dad loved his family he was always happy to see them all and loved to visit and talk about the old days. He always welcomed everyone into his home and always made sure they had something to eat and drink. Dad loved listening to his old time music and reminisced about the “good old days” as he would say. He enjoyed sitting outside especially when the weather was nice and just watching everyone and visiting all who stopped by to say “hi”. His life was full of happy memories cause he was his own comedian always making everyone smile and laugh. So don’t grieve to long because he would want his loved ones smiling up at him as he watches over us. As he always did. He was a happy man and he loved us all and he is no longer suffering and will forever be with us in spirit and our hearts. Melvin is survived by his wife Madeline; his sons: Pierre and David Sr. and Dustin; his daughters: Myra and Melda and Patsy. Grandchildren : Lee , Luke , Harold , Joshua , Louis Jr. , Issiah , David Jr. , Jeremiah , Vincent , Hezekiah , Lakota , Dimitrie , Rebecca , Alicia , Erin , Rachael , Angel , Margaret. Great Grandchildren: Aiden , Colton , Lee Jr. , Zephania. His brothers: Bernard LeClaire and Vincent LeClaire Jr. of Dupree, SD and Edward LeClaire of Duluth, MN and Sister: Annabelle LeClaire of Duluth, MN. His cousins : Gordon and Michael Condon of Dupree , SD and Karen , Bernice and June Condon of Eagle Butte , SD. His aunt Elberta Danley of Eagle Butte , SD. Melvin was preceded in death by his father : Vincent LeClaire Sr. and his mother: Margaret Creek-LeClaire, his brother : Pierre LeClaire , his sister: Alice LeClaire, his paternal grandparents: David and Alice Gasman-LeClaire and his maternal grandparents: James and Josephine Creek. Honorary bearers: CARRIE FAST HORSE, AMELIA MORRISON & FAMILY, TERRY HALFRED, PHILLIP BLUE COAT, MIKE O’NEAL, FRANCIS “INKY” WEST, RUSSELL BENOIST, VERNON & THEO IRON CLOUD, GOOD HOUSE FAMILY, CLIFTON BROWN THUNDER, WAYNE MEDINA, MARILYN PARKER MEDINA, JOANNE FRAZIER & FAMILY, JENNIFER NETZER & FAMILY, HEATHER NETZER, DAVID DUPRIS & FAMILY,JUANITA HERRALD & FAMILY, ERNESTINE FRAZIER & FAMILY, ELLEN CONDON- IN THE WOODS & FAMILY, ANNIE IRON BIRD, DANIEL AFRAID OF HAWK & FAMILY, HAROLD CONDON & FAMILY, WILBUR BETWEEN LODGE, BERNADINE CONDON & FAMILY , MONTE CONDON, MERRILL CONDON, JEANNETTE CONDON, AND ALL EXTENDED FAMILY AND FRIENDS. Pall bearers: DAVID LECLAIRE SR., LEE LECLAIRE SR., HAROLD LECLAIRE, LOUIS RIVERA JR., DELWIN LECLAIRE, BRENT LECLAIRE, RICK WHITE, JORY CONDON, WILL C. LECLAIRE, INAJIN FRAZIER, DUSTIN CONDON Funeral arrangements have been entrusted to the care of Rooks & Annis Funeral Home of Eagle Butte, SD Online condolences may be offered at rooksfh.com and rooks & annis facebook page.

The family of Melvin LeClaire created this Life Tributes page to make it easy to share your memories.