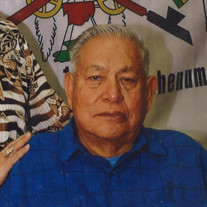 Merrill Frank Halfred, age 75, of Eagle Butte, entered the Spirit World on Saturday, August 8, 2016 at the Cheyenne River Health Center. Merrill Frank Halfred was born September 4, 1940 to Isaac and Josephine (Berry) Halfred on the Ft. Belknap Indian Reservation. He resided in various areas as his parents worked for the U.S. Government and they made their home in Tacoma, WA and later moved to Custer, SD. From there they moved back to the Old Cheyenne Agency where he attended High School at C-EB. Once the flooding of the Old Agency occurred they then moved to Eagle Butte. It was during his senior year of High School at C-EB that he accepted Jesus Christ as his personal Lord and Savior. He met the love of his life, Florence LeBeau, and they were married on March 11, 1966 at the Church of God in Eagle Butte. To their union five children were born: Sharon, Karon, Deborah, Isaac and Michael. His wife’s parents, Sullivan and Lillian LeBeau, had a great admiration and love for him as their son-in-law, and Merrill would often go hunting as a food provider to them. Merrill was very close to his brother, William, and had great respect for him as his older brother. He loved his wife’s siblings and gave them each a special nickname, which they all liked. He traveled to many places across the United States and Canada teaching about the salvation to be found in Jesus as well as giving testimony to the powerful works of Jesus Christ through his ministry with his guitar music and singing. To the very end he endured with a steadfast spirit that St. Paul eloquently exhorted the followers of Christ to endure to the very end with. He is survived by his wife, Florence Halfred of Eagle Butte; two sons, Isaac Halfred and Michael Halfred of Eagle Butte. Three daughters, Sharon Halfred, Karon Buffalo and Deborah Halfred of Eagle Butte. One brother, William Halfred of Oklahoma. 17 Grandchildren and 3 Great Grandchildren. He was preceded in death by his parents and one brother, Barry.

The family of Merrill Frank Halfred created this Life Tributes page to make it easy to share your memories.