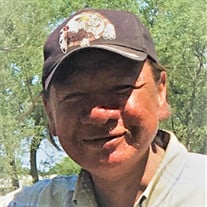 Dear Cheyenne River Lakota Oyate Family, the following funeral information has been a long time coming for the Richard Larrabee, Sr. Family. Please keep the Larrabee Family in your heartfelt prayers as they prepare to finally lay to rest their beloved Richard. The Memorial Card information is provided below. Richard A. Larrabee, age 40, of Eagle Butte, SD, entered the Spirit World on April 14, 2016 at Red Scaffold, SD Our Beloved, Hehaka Hoksila- Elk Boy, Richard Alexander Larrabee, Sr was born on January 7, 1976 at Eagle Butte, SD to Benjamin and Bernice (White Dog) Larrabee. The youngest boy of three sisters, and two brothers. He was also the youngest boy of the “cousins” of the Larrabee Tiwahe. He was raised in Green Grass, SD on the “West End” by his parent and Grandparents. Richard lost his mom at a young age and she became his Gramma Marion’s “Baby Boy.” You could always see “Lil Richard” riding on a horseback with just rope halter, with his zizi hair glistening in the sun, with a grin that could brighten anyone’s day. Lil Richard grew into an expert horseman who would join the circle of Lakota men who are known for their relationship with the Sunka Wakan. Whether it was breaking a horse, training a horse, or simply riding for the fun of it, Richard could always be called upon for help, and many families of Cheyenne River were blessed with his help with their horses. Richard was always a relative we could count on in so many ways. He always stood strong in a quiet and gentle way. He will always be remembered for his kindness and concern for his family. In 1992, Richard married Robin Bad Male and together they had two sons, Trenton and Richard “Baby Huey” Larrabee, Jr. They made their family home In the Green Grass Community. Often you would cross paths with Lil Richard on the Powwow trail, where he sang with “Peji To Wakpa” drum group. He loved singing and sharing his voice often in support of the dance circle. To describe him you could never say he chased the almighty dollar as so many of his generation do, but instead he was a man that would you his last dollar. To visit and share stories with lots of laughter was who he was. Carrying a staff in prayer during the Big Foot Ride was who he was. Our Relative Richard, Hehaka Hoksila “Elk Boy” was an ikce wicasa who had love for the oyate. A loving father…..A wonderful brother…..a respected nephew to his aunts and uncles who adored him. A mindful grandson to his grandparents that cherished him. A son that brought love to his parents. A man that had love for his tiwahe …..He will be forever held in our hearts and forgotten …..until we can meet in the heavens and that grin again. Richard is survived by his son, Trentin Larrabee, of Eagle Butte, SD; two brothers, Poncho Larrabee and Loren Larrabee of Eagle Butte and one sister, Kimberly Larrabee of Eagle Butte. He is also survived by numerous cousins, nieces and nephews. Richard was preceded in death by his parents, Ben and Bernice Larrabee, sisters, Connie (Larrabee) Clown, Linda (Larrabee) Looking Horse, son, Richard A “Huey” Larrabee, Jr., Grandmas and Grandpas, Martin and Marion (High Elk) Edna, Sullivan and Sophie Larrabee. A Team and Wagon funeral procession will begin at 4:00 PM, Friday, August 23, 2019 at the 4 mile Junction and proceed to the CRST Old Agency Building in Eagle Butte for an all-night wake service, with prayers beginning at 7:00 PM. Funeral services will begin at 10:00 AM, Saturday, August 24, 2019, at the CRST Old Agency Building, with Sr. Addy officiating. Traditional Lakota Prayers and Burial Services will be officiated by Dana Dupris. A luncheon will follow the funeral service and burial will then take place at the UCC Cemetery at Green Grass Cemetery, Green Grass, SD. Funeral arrangements have been entrusted to Rooks Funeral Home of Eagle Butte.

Dear Cheyenne River Lakota Oyate Family, the following funeral information has been a long time coming for the Richard Larrabee, Sr. Family. Please keep the Larrabee Family in your heartfelt prayers as they prepare to finally lay to rest their... View Obituary & Service Information

The family of Richard A. Larrabee Sr. created this Life Tributes page to make it easy to share your memories.