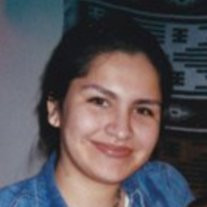 Teressa Mary Rose Eagle Elk (Anpo Wichapi Win) was born in Yankton, SD on February 10th, 1979 and passed away on March 30th, 2013 in Phoenix, Az. She was born to the late Wilfred Eagle Elk and Dr. Patricia Iron Shell-Hill. Her step-father is Harold D. Hill. Teressa was welcomed into life by her older sister, Luta Durgam (Dave), brother, Inyan Eagle Elk. Her younger siblings include: Sylvia Lasley (Keith Brave Heart), Stephanie Thomas (Shawn Bordeaux) & Zack Hill. Teressa is the great-great-great granddaughter of Itacan Maza Panke Ska (Chief Iron Shell) and is a member of the Aske Glapemani Tiyospaye. She is also a member of the Standing Bull/Eagle Elk/Running Horse Tiyospayes of the Sicangu Lakota Oyate/Rosebud Sioux Tribe. Teressa grew up on the Rosebud Indian Reservation, Rosebud, SD. She attended schools in the Rosebud, Flandreau, Rapid City, South Dakota School systems. She made friends easily and was liked by many of whom she remained close to over her life-time. Teressa accomplished many things in her short life. She would say her greatest accomplishment was bringing her son into the world, Wakinyan [Ihanble] Tyler Martinez, born on April 19, 2000 to her and Alex Martinez of Youngtown, Az. Teressa’s world revolved around her son and her role as his mother was her life goal. Teressa met Jacob Hugueley of Mesa, Az. ten years ago, and she referred to him as her soul-mate. They were companions of ten-years. Jacob’s family will also miss Teressa. Additionally, Teressa is missed by many of her friends and classmates over her lifetime. Teressa was a woman of many gifts. She was a communication hub for family and friends and could be counted on to stay in touch frequently. She loved family life and never was happier than when she was with relatives and friends. Teressa grew up with a great bond of love for her family, was especially protective of her two younger sisters and was the plan maker and the activity organizer. She loved to fight for doing the right thing. She never could stand to see anyone suffer, especially because of any kind of victimization. She had decided that she would study to be a lawyer and was proud of winning three civil court cases and planned to begin a class action law suit. Teressa had a brilliant mind and could have done anything she put her mind to. She was particularly proud of designing a program patch for the Official Flight Kit (OFK) aboard Shuttle/Orbiter Discovery, STS-60, February 3-11, 1994 for the National Aeronautics and Space Administration. This young woman was not afraid to be friendly to anyone. She was outgoing and approached people to introduce herself if she was not introduced first. She shared her beautiful smile generously, and her sense of humor was tops. She was always ready to see the best in people, and hope in any situation, no matter how gloomy it may have appeared to others. Teressa loved everyone she knew, as she expressed in her Facebook message (02/12/13): “I am so happy to know all of you, every single one of you we have a story, you are still in my life, I love you all.” Teressa performed many acts of kindness in her life in whatever venue she found herself, be it at work, school, neighborhood life, etc. Teressa helped many single mothers whom she lived near and met at various college classes, or work places. She would baby sit, cook, study with them and enter their various struggles for justice. Teressa was also involved in the pro-life cause in Phoenix, AZ. She remained passionate about children and the unborn. Teressa had a lot of love for the people in her life and always had a “can do” attitude, and she encouraged that way of thinking with those who shared their dreams with her. She lived life in the moment and lived it to the fullest. Because she could see so clearly the difference between right and wrong, it would break her heart anytime she saw another obvious display of a flawed world. Teressa graduated from Peoria High School, Peoria, Az. She attended Glendale Community College in Arizona. She worked in administrative positions for the City of Mesa and retail stores. She also did some modeling for companies. She planned on being a lawyer. Teressa planned to do a vision quest and sun dance this 2013 summer with her Uncle Roy Stone, Sr., Parmelee, SD. She has sun danced at Looking White Sundance in Norris, SD. Teressa also attended the Catholic Church and partook in the sacraments of the Church. Teressa Mary Rose Eagle Elk, will be leaving behind the most important person in her life, her son, Wakinyan Tyler Martinez of Youngtown, Az; her mother, Dr. Patricia Iron Shell-Hill of Rosebud, SD; step-father, Harold D. Hill; Sisters: Luta Durgam and her family (Dave & Joey), Peoria, Az., Stephanie Thomas and her family, Mission, SD, Sylvia Lasley and her family, Rosebud, SD, & brothers, Inyan Eagle Elk, Sioux Falls, SD, Zachary J. Hill of Rosebud, SD; her aunt Barbara Sokolow and her family of Eureka, CA, and many beloved nieces and nephews, cousins, and friends from South Dakota and Arizona.

The family of Teressa Mary Rose Eagle Elk created this Life Tributes page to make it easy to share your memories.