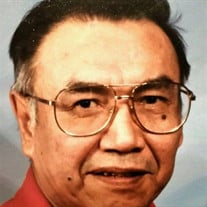 Benjamin Carl Brings Plenty, age 76 of LaPlante, SD, entered the Spirit World, Monday, January 12, 2015 at the Lake Andes Senior Living Center, Lake Andes, SD. Benjamin was born to Daniel Brings Plenty and Emma Amy Lee on the Cheyenne River Sioux Reservation at Old Cheyenne Agency on November 21, 1937. Benjamin had an older brother, Major Brings Plenty, and a younger brother, Abraham Brings Plenty, and one sister Katherine Brings Plenty. Benjamin spent his childhood days in and around Laplante, SD, and attended school at Old Agency. He joined the U.S. Navy when he was 17 yrs. old and was a photographer, after being Honorably Discharged, joined the US Marine Corps and was Honorably Discharged. He was a photographer on the U.S.S. Kitty Hawk. Ben Brings Plenty met Phoebe Clown and they were married on May 7th, 1962. They had four sons, Stephen, Andrew, Roderick, and August. While they were married, they lived in Oakland, CA, Roswell, NM, Glasgow, MT, as well as Eagle Butte, SD. Benjamin was a Chef/Cook by trade and also a carpenter. He worked in the Cheyenne Eagle Butte School Kitchen for many years. He then worked at different programs throughout the CRST Reservation and in Eagle Butte, SD. In the year 1999 he moved to Tucson, AZ, for several years, then moved to back to Eagle Butte. In 2004 he moved to Rapid City, SD, where he lived with his son Troy Brings Plenty. In the 2005 he moved to the nursing home due to his health where he lived until his passing on January 12, 2015. Benjamin spoke fluent Lakota and in his younger years travelled around the country with his father and brothers doing exhibition Lakota Dancing. Benjamin and his brothers would dance while their father sang with a hand drum. One of their dances featured them picking up quarters from the ground with their teeth because they danced so low. They also performed a traditional dance called the Butterfly Dance. Benjamin was a Lakota cowboy, and also broke horses in his younger years. Benjamin liked to sing and play the guitar and banjo in his spare time. He was very proud of his service in the military and often told stories of his many adventures and deeds. He is survived by one sister Katherine Webb of Tuscan, AZ; his sons, Stephen (Rebecca) Brings Plenty of Rapid City, SD, Andrew ( Jeannie) Brings Plenty of Dupree, SD, Roderick Troy( Peggy) Brings Plenty of Rapid City, SD; Special Nieces and Nephews Sharon, Maxine, Cynthia, Marvin, Harvey, and Faron Brings Plenty, Carolyn (Vince) Ramirez, Nelson, Grace, Jesse, Eva, and Lavinus Webb and Thomas Keith; Grandchildren Cody Rae, Sidney, Stevi, Karlyle, Kordell, Tully Rose, Connor, Madisyn, Levi, Clarence, Jarrah Jade, Morgan Rose, Crystal Rae, and Grace; and great grandchildren: Sophia, Sunny, DIllyn, Jailyn, Jaden, Allison, Rayevan Lena, Nathan, and Marty, and many, many, special grandnieces and nephews, cousins, and family members. He was preceded in death by brothers Abraham and Major Brings Plenty, his wife Phoebe Clown, son August Dwayne Brings Plenty, grandson Zane Brugier, and his parents Daniel and Amy Brings Plenty. Funeral arrangements have been placed in the care of Annis, Rooks & Red Dog Funeral Home of Eagle Butte. Online condolences may be offered at rooksfh.com and our Rooks & Red dog facebook page

The family of Benjamin Carl Brings Plenty created this Life Tributes page to make it easy to share your memories.