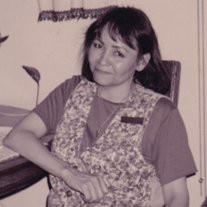 Cecelia Odette Four Bear, 57, entered the Spirit world early Monday morning, November 4, 2013 at the Rapid City Regional Hospital. Odette was born January 5, 1956 at the Old Cheyenne Agency to the late Joseph Paul and Hazel (Jones) Four Bear, Sr. She was a proud descendant of Chief Four Bear. She was raised and attended school at Timber Lake, Gettysburg, and Cheyenne Eagle Butte. She received her GED in 1974. Odette began her college education at Northern State College in 1978. She attended both Presentation College and The Cheyenne River Community College in 1986 earning an Associate of Science Degree in Nursing. This was her life long dream to become a nurse and provide car for people. She also took nursing course work from the University of South Dakota, South Dakota State University in 1988. She finally completed the course work for a BA Degree in Organizational Behavior & Management from Sioux Falls College in 1991. Her professional work experience included working for the CRST as an Employment Counselor for the CETA Program in Eagle Butte from 1981-83. A Registered Nurse for the IHS Hospital in Eagle Butte from 1986 to 92; Healthy Start Coordinator from 1992 – 93; Field Clinic Supervisor, 93-96; Health Services Manager at the Job Corp in Nemo, SD, 96-98; Diabetes Program Coordinator, 98-99; Director of Nursing, IHS Lower Brule, 99-2001; Clinical Nurse, CRST, ’01-’05. In 1990 Odette received the Service Unit Employee of the Year Runner Up award for her exemplary performance at nursing duties at the PHS Hospital in Eagle Butte. Whe she was off duty, she would sit with patients to comfort them. She also received the Excellence Nursing Award for committed and dedicated services for beneficiaries of CRST. Odette was very proud of the Cheyenne River Sioux Tribe when it recognized her abilities and efforts as a grants writer that resulted in the Tribe being awarded the Breast and Cervical Cancer Early Detection Grant, which was a great benefit to the CRST. For this the Tribe declared on October 6, 1994, Odette Garreau Day. To this day the grant continues to be funded and has saved countless lives. Odette has received many awards and recognition throughout her professional career, too numerous to list, from her Tribe, other Tribes, Indian Health Services and other organizations she worked for. In 2005 she retired due to diabetes related health problems. Odette met and married Morgan Garreau in 1976. They were later divorced. They raised three children together: LeAnne, Joseph and Louis. Odette enjoyed cooking for family and friends at special and Holiday functions. She loved to go to casinos, too. Even after Odette lost her eyesight she and Morgan continued to patronize casinos throughout the area. She enjoyed visiting on the phone with family members and friends, and also visiting time with her family and friends. Odette is survived by her daughter: LeAnne Brings Horse, Eagle Butte; Louis Garreau, LaPlante, SD; three brothers, Curtis Marshall and Michael Four Bear of Swiftbird, SD. Keith Marshall, Sturgis,SD. Five sisters: Jennifer Molash, Swiftbird; Charlene Four Bear, Marksville, SD; Doreeta Bowker and Cheryl Four Bear of LaPlante, SD; Lisa Four Bear, Eagle Butte. Her aunt, Doris LeBeau White, along with grandchildren: Jace, Terrance, John, Hunter, Amanda and Phoenix. Great Grandchildren: Kobe, Thomas, and a very special Great Granddaughter, Kingsten Grayce, along with numerous nieces, nephews and cousins. Odette was preceded in death by her father, Joe Paul Four Bear, Sr. and her mother, Hazel Jones Four Bear, brothers, Joe Paul Four Bear, Jr. and Eugene Four Bear; sister, Deanne Andrews and a son, Joseph Garreau. A one-night wake will begin at 5:00 PM Friday, November 8, 2013 at the Johnson Cultural Center in Eagle Butte. Episcopal funeral services will begin at 10:00 AM, Saturday, November 9 at the Johnson Cultural Center, with the Rev. Mother Margaret Watson officiating. Interment will follow at the Ascension Episcopal Cemetery at Black Foot, SD.

The family of Cecelia Odette Four Bear created this Life Tributes page to make it easy to share your memories.