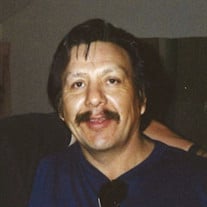 Dale W. Yellow Horse, Sr. age 67, of Eagle Butte, SD, entered the Spirit World Monday, September 22, 2014 at the Cheyenne River Health Center, in Eagle Butte, SD. A one night wake will begin at 5:00 PM, Sunday, September 28, 2014 at St. John’s Episcopal Church at Eagle Butte, with a prayer service beginning at 7:00 PM. Funeral services will begin at 11:00 AM, Monday, September 29, at St. John’s Episcopal Church, with Mother Margaret Watson officiating. Burial will follow at Emmanuel Episcopal Cemetery at White Horse, SD. Dale Warren Yellow Horse was born on February 4, 1947 at Old Cheyenne River Agency to Lola Packard. Dale attended Old Cheyenne Agency Boarding School, Bishop Hare School for Boys, Mobridge High School and later in his senior year Rapid City High School, with basketball being his favorite sport. His family then moved to Morgan Hill, California where he attended a trade school in the mechanic field. He moved back to South Dakota and lived with his grandparents in White Horse. He met and married Margaret (Margie) Hawk and began his family; Tyra, Dawn, Dion and Daniel. They lived in Mobridge until relocating back to Morgan Hill to be closer to his mom and siblings. Being the country boy he was, he moved his family back to South Dakota. Margie and he separated peacefully and he then met Shannon Carter and born to this union was Joni Rae and Wacey. He was a very proud father and grandfather. He loved to talk and (bragg) about each and every one of them. He was not only their Dad but also their best friend, they could talk to him about anything. Dale loved to joke and never called anyone by their given name. Everyone had a nickname. Dale was a strong man but had the patience of a saint. He helped anyone who needed it and would give you the shirt off his back. He had many friends and never met anyone he didn’t like. He was better known as “Uncle Dale” to many. He loved small children and they loved him. Wherever you found him, there were bound to be kids too. He was not only one of the best skilled mechanics in our area but also a jack of all trades. His work history included employment at Cheyenne River Housing Authority, Game, Fish & Parks, and numerous Construction contracts. He helped build the White Horse Day School. He helped many ranchers while living in White Horse area. His last years were spent in Eagle Butte at the Evergreen Apartments where he made many friends. Grateful for having shared his life are his mother, Lola Packard of Morgan Hill, CA, three sons: Dale (Natalie) Yellowhorse of Los Lumas, NM, Daniel (Kim) Yellowhorse of Wakpala, SD, and Wacey Yellowhorse of Aberdeen, SD; three daughters: Dawn (Pat) Davis, Mobridge, SD, Joni Rae Yellowhorse & Josh Keller of Mina, SD, and Tyra Tiger of Mobridge, SD. Two brothers, Curtis (Melinda) Yellowhorse, Cotati, CA and Rick (Alice) Packard of Gilroy, CA; two sisters: Loretta Fiddler of San Jose, CA and Marilyn Yellowhorse of Morgan Hill, CA. One uncle, Joey (Nina) Fiddler; 15 grandchildren, 5 great-grandchildren and numerous nieces and nephews. Dale was preceded in death by his maternal grandparents, Joe and Myrtle Fiddler, and many close relatives too numerous to count. Dale was a very vibrant person who was loved by many, touching the hearts of all. He will be greatly missed. Funeral arrangements have been placed in the care of Rooks & Red Dog Funeral Home of Eagle Butte.

The family of Dale W Yellow Horse created this Life Tributes page to make it easy to share your memories.