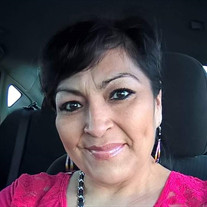 Dana Lynn Keckler, "Wicahpi Omni - Walks with the Stars", was born September 25, 1971 in Chamberlain SD to the Late Mary Louise Horn and Vincent Thompson Sr. In her grade school years, Dana attended various schools, but her childhood was mostly spent in Lower Brule with her, “Kul Wicasa Family”, before moving back to Eagle Butte where she excelled in basketball and track. This is when she met her lifelong friends, “The Sesame Street Gang.” You girls know who you are, and if you don’t, “You better check yourself before you wreck yourself.” In 1986 she met Tracey Maupin and in 1988 she welcomed her first born bundle of joy Beau Bradley. In 1989 she met and married Justin Keckler and from this union her Baby girl Jessica Michele was born. Justin and Dana moved their family to Aberdeen, SD where they made their home, continued their education, and started their careers with the government. In 1998 when she lost her mother Mary Louise, Dana and Justin took in her younger brothers and sisters. Although they had a family of their own they gladly took it upon themselves to continue raising Dana’s siblings. Dana had always helped with her brothers and sister, loving them like her own, and had been more like a mother to them growing up. Dana and Justin remained in Aberdeen until 2003 when they moved their family back home to Eagle Butte where she held different positions with the Cheyenne River Sioux Tribe. Dana loved playing pool and throughout her many years of shooting, created her own “pool family”, and who she was always happy to reunite with. She also liked to play Texas Hold’em and was ready to play when enough people were rounded up for a game. The holiday season was her favorite time of year because it meant bringing her family together, often she would cook a meal just as long as it meant they would all be there. When she became a Grandma, she was so proud of her precious grandbabies Rilyn and Peyton, she loved to show them off and stopped in for a visit every chance she got. Dana had a big heart for those she loved, always had a listening ear, and would open her home without hesitation for them. Gypsy girl was her best friend and whenever you saw Gypsy coming Dana wasn’t far behind. Dana is survived by her son Beau Keckler/Bailey High Bear, daughter Jessica Keckler/Kyle Walters, special niece Kaylee Agneaux. Brothers Shane Goodlow/April Flute, Wade Bad Warrior, Chad Bad Warrior, Vincent Thompson, Jr., Sisters Leslie Blue Arm/Brionne Blue Arm, Jocelyn Bad Warrior, Val Thompson, Sammi Thompson, Sara Thompson, Rochelle Thompson and Anna Thompson. Nieces and Nephews Mary Louise, Angel, Landon, Caden, Jace, Taya, Jacob, and Taylor. Special friend-Allan Red Fox, and her sidekick service dog “Gypsy”. Her Aunty/Mom, Louella Chamberlain, Kathy Goodlow & Donita Johnson, and Uncle Louie Horn She is proceeded in death by Mother Mary Louise Horn, grandson Riley Eugene Walters, Grandmas Gerdy Horn, June Middletent, Grandpa Andrew Horn and special friend Sherri Shepherd.

The family of Dana Lynn Keckler created this Life Tributes page to make it easy to share your memories.

Dana Lynn Keckler, &quot;Wicahpi Omni - Walks with the Stars&quot;, was...