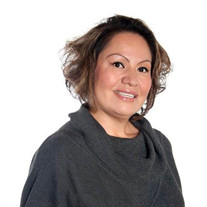 Hope Marie White Bear, age 43, entered the Spirit World on Wednesday, October 15, 2014 at Dickinson, ND. A viewing and prayer service will be held from 10 AM to 4 PM, Monday, October 20, 2014 at the Mother Butler Center in Rapid City. A visitation will be from 7 – 9 PM, Monday, October 20, at Rooks & Red Dog Funeral Home in Eagle Butte, SD. Funeral Services will begin at 10:00 AM, Tuesday, October 21 at Rooks & Red Dog Funeral Home, with the Rev. Norman Blue Coat officiating. Burial will follow at UCC Community Cemetery, Green Grass, SD. Hope Marie White Bear was born Hope Marie Black Bear on October 10, 1971 in Rapid City, South Dakota, to Linda Marie (Black Bear) and Gerald David Red Leaf Sr. She lived with her mother in Green Grass until her mother passed away in 1977. She became Hope Red Leaf when she went to live with her father and step mother, Gerald and Glenda Red Leaf in Rapid City South Dakota. She grew up in Rapid City and had three children that were adopted: Amber, Nathan and Brittney. Hope moved to Bismarck North Dakota in 1998 where she met and married Anthony White Bear. Together they had two children Arianna and Anthony Jr. and settled in Mandan, ND. Hope graduated from United Tribes Technical College with an Associate’s degree in Injury Prevention. She worked as a Woman’s Rights Advocate and as a teacher at United Tribes Technical College. She was divorced in 2011 and returned briefly to Rapid City again and then Bismarck before moving to Dickinson to work in the oil industry. Hope had a big heart and loved everyone, her friends, family and even strangers that needed a hand. She loved to make people smile and laugh with her quick witted sense of humor. She was always generous with her time and would share whatever she had with those around her. She loved to encourage others and tried to lift the spirits of anyone that needed it. She touched the lives of many and she will be missed and remembered with love. She is survived by her father and step mother Gerald and Glenda Red Leaf, her siblings Jason Vermillion, Ray (Julie) Red Leaf, Gerald David (Duana) Red Leaf Jr., Nicolas Red Leaf, and Jennifer Red Leaf; and her children Amber Muir, Nathan Ziegmann, Brittnay Ziegmann, Arianna White Bear and Anthony White Bear Jr., one grandchild Ava Muir and many aunts, uncles, cousins, nieces and nephews. Hope was preceded in death by her maternal Grandparents Garnett and Helen Black Bear, her paternal Grandparents Steven and Vivian Red Leaf, her Mother Linda Marie (Black Bear) Red Leaf, and one great granddaughter Azalea Muir.

Hope Marie White Bear, age 43, entered the Spirit World on Wednesday, October 15, 2014 at Dickinson, ND. A viewing and prayer service will be held from 10 AM to 4 PM, Monday, October 20, 2014 at the Mother Butler Center in Rapid City. A visitation... View Obituary & Service Information

The family of Hope Marie White Bear created this Life Tributes page to make it easy to share your memories.