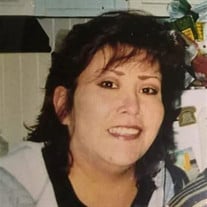 Kristi Lynelle Red Bird was born in Eagle Butte on September 1, 1967 to Milo and Zelda (Shot At) Red Bird. Kristi grew up in the Dupree area until 1975 when the family moved to the country, southwest of town. She attended school at Dupree and Cheyenne Eagle Butte and received her GED in 1986. On June 25th,1987 Kristi had her first child, a daughter, Lindsey Nicole Defender. On July 17th, 1989 Kristi had her second daughter, Katlyn Alayna Defender. In 1992 Kristi applied and attended college at United a Tribes Technical College for one year. In 1994 after returning home Kristi worked for Carv and Margaret Thompson at the Thompson Drug store. In 1995 Kristi started working for Lakota Thrifty Mart for Bernie Laplante. In August 1996 Kristi lost a baby boy, D'Andre. On January 26, 1999 Kristi had her son, Cambryn Brahm High Elk. On May 2nd, 2000 Kristi had her third daughter, Fallon Caelie (Sister) High Elk. In 2004 Kristi started working as a Community Health Representative for the tribal program. She enjoyed this job and working with her elderly patients. She kept in contact with a few of her patients and often wondered how they were doing. Kristi retired in 2016 due to health reasons. In her free time Kristi enjoyed watching tv. Her favorite programs were Say Yes to the Dress, My Big Fat Gypsy Wedding, Pitbulls and Parolees and her favorite series Little House on the Prairie. Kristi also enjoyed watching Cam play basketball, cruising around, fishing, taking the kids swimming and spending time with the family. Kristi will be greatly missed by her family and friends. She is survived by three children Lindsey Defender, Cambryn High Elk and Fallon High Elk. Three grand children her Evee girl Diamonique, Kymani and Xianna all of Eagle Butte. Two sisters Leah Red Bird and Delphine Colombe aka FeenieMae Red Bird. Her sister in law Karen Red Bird of Peridot, AZ. Eight nieces and nephews Kim, Kayla, Keaton and Kaylynn Red Bird, Kennon and Kellon Peniska, and Cassidy and Jayden Hollow Horn. She was preceded in death by her mother, father, brother Curtis, and two children Katlyn and D'Andre. The burial of cremains will take place at a later date.

Kristi Lynelle Red Bird was born in Eagle Butte on September 1, 1967 to Milo and Zelda (Shot At) Red Bird. Kristi grew up in the Dupree area until 1975 when the family moved to the country, southwest of town. She attended school at Dupree and... View Obituary & Service Information

The family of Kristi Lynelle Red Bird created this Life Tributes page to make it easy to share your memories.