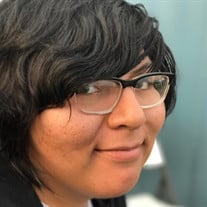 Romy Alexis Grace Rabbit, 20, of Pierre, SD, was born in Mitchell, SD on June 13, 1998 and entered the Spirit World on September 4, 2018. She was the oldest of three daughters to Ravae Bowman & Travis Rabbit. Romy began her life by living in Ft. Thompson, SD. When Romy was two, Mom & Dad moved with her to begin a better life than the Reservation. Romy started her elementary years in Pierre. At first attending Head Start at Oahe Childhood Development Center, then moving to Buchanan Elementary School where she attended up to 3rd grade. In 2008, the family then moved to Cut Bank, MT, where she attended the 4th grade. After the school year in May of 2009, the family then moved to Longview, WA, where they remained until the end of summer of that same year. Due to unforeseen circumstances, the family moved back to Eagle Butte where she attended Cheyenne-Eagle Butte until 2012. In October of 2012, the family moved back to Pierre where she finished school at Georgia Morse Middle School. She tried to attend High School at TF Riggs in Pierre, but it was just too much so she was able to finish her freshman year through an online course. Unfortunately, school was never in her cards. The family remained in Pierre until February of 2016 where they moved to Missoula, MT. In June of 2018, Romy turned 18 and it was her choice to move to Pierre, where she resided until her passing. Anyone who knew Romy knew that she was shy at first, but once she was comfortable around you, that shyness went out the window! Romy was always ready to hangout, play some Halo Reach, listen to her music, or just sit and watch some kind of series on Netflix. She was forever doing something on her phone with all the apps that she had but was always doing music videos. He and her cousins, Emily and Rhiannon, were always taking goofy pictures, as whereas she was always ready for a photo shoot. Romy is survived by her mother, Ravae Bowman, her two sisters, Michelle and Hannah Rabbit, one brother, Caleb Moore of Missoula, MT. Maternal grandmother, Ginger Bowman of Eagle Butte, SD, Uncles Joe R, Jim (Jennifer) Bowman and Leo Bowman, all of Eagle Butte. Cousins, Emily Bowman, who was more like a sister than a cousin, Rhiannon LaPointe, Phoenix Estes, all of Pierre, SD, Zander and Ryan (Leo) Bowman, Suni and Rowie (Joe R.) Bowman, Addison and Reagan (Jim) Bowman, aunts Adrienne (Wayne) Two Hawks, Ft.Thompson, SD and all other Aunts, Uncles, cousins, nieces and nephews too numerous to count. Romy was preceded in death by her maternal grandpa, Big Joe Bowman, Great-Grandpa Edward DuPris, Great Grandma Evelyn DuPris, paternal grandparents Wesley Rabbit and Arliss Metcalf. The Family would like to extend a special thank you to everyone who was involved in the crash.

Romy Alexis Grace Rabbit, 20, of Pierre, SD, was born in Mitchell, SD on June 13, 1998 and entered the Spirit World on September 4, 2018. She was the oldest of three daughters to Ravae Bowman & Travis Rabbit. Romy began her life by living in... View Obituary & Service Information

The family of Romy Alexis Grace Rabbit created this Life Tributes page to make it easy to share your memories.