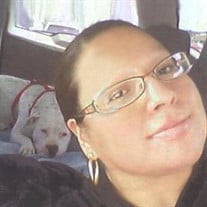 Dear Cheyenne River Lakota Oyate Family, the following Tessa Curley funeral service information is for your prayerful consideration. Kindly, Charlie Rooks Funeral Director Tessa Curley, 39, of Box Elder, entered the spirit world Sunday, October 11, 2020 at her home. In compliance with the CRST Tribal Directives, a visitation for family only will be from 11:00 till 1:00 MST, Monday, October 19, 2020 at Rooks Funeral Home in Eagle Butte. Funeral Services will begin at 1:00 p.m. Burial will follow at the Fool Dog Cemetery at Iron Lightning, SD. Tessa Lavae Curley was born January 1, 1981 in Eagle Butte, SD and entered the spirit world on October 11, 2020 at Box Elder, SD. Tessa was born to the late Kenneth Curley and Sharon Brings Plenty. She comes from the Wakinyan Maza and Ota Au Tiospaye. In 1985 Tessa moved with her family to Pierre SD until June 1990 then they moved to San Jose, Ca. In 1999 she and the family moved to Rapid City and later Box Elder where she lived until her passing. Tessa attended elementary, Jr. High and High School in San Jose, later receiving her GED. She was in the process of pursuing her higher education to become an elementary teacher. As a little girl she became a member of Girl Scouts, she sold cookies and did her part to earn her Girl Scout pins. During this time, she became a fancy dancer which she continued doing into the 6th grade. She was also a member of the Pony Thunder Dance group, performing throughout the Bay area with her little sister Jean. Tessa also participated with an Azteca Dance group, she enjoyed the dancing and learning about their culture. Tessa received her Lakota name in 2018 of which she was immensely proud. When the family held a run from the Iron Lightning junction to the Iron lightning pow wow grounds in honor of Grampa Cecil sr., she was one of the runners along with her cousins and uncles carrying the staff. In 2017 she completed a DUI program and was selected as one of the speakers at her graduation. Afterwards she was asked to sit on that committee and give her input. She was even interviewed on KOTA for this. Tessa was continually active in the church she selected, as she turned her life around and became a born-again Christian. She talked a lot about having the Lord in her life. She was also learning about the Lakota traditional way of life. She was immensely proud of her culture, always holding her head up high, and learning to live in two different cultures. Part of Tessa’s daily routine included smudging and praying every morning. She worked various jobs during her time in Rapid City and Box Elder. Tessa would always greet you with a smile, she was always happy to see friends and relatives. Tessa became a mother on January 6, 1998 to her son Silas and was very very proud of him and her ate' Kenneth was a proud Grandpa. Tessa is survived by her son: Silas Curley-Castanada of Phoenix AZ; mother: Sharon Brings Plenty of Rapid City SD; sisters: Kimberly Hawk Eagle of Ft. Yates ND, Shannon Hawk Eagle of Marshall Town IA, Tanya Grijalra of Rapid City SD, and Lonna Joshua of McLaughlin SD; nephews: Ranon, Jared, Larry Jr., Lucas and Avery; aunts: Cynthia Raymore, Maxine Brings Plenty, Carolyn (Vince) Ramirez, Amelia Curley, Melissa (Marcel) Jewett, Joan Curley, Linda Addison and Ethelene (Dane) LeBeau; uncles: Harvey, Faron, Marvin, Steve and Troy Brings Plenty, Cecil Jr., Danny (Valerie), Irving and Keith (Delores) Curley; grandmother: Katherine Brings Plenty, and numerous cousins. Tessa is preceded in death by her father, Kenneth Curley; sister, Jean Curley; uncles: Andrew Brings Plenty, Myron, Arlan and Andy Curley; aunt, Grace Curley-Agneaux; cousins: Bernadina Calderon, Duane “Auggie” Marcelle, Sher-ron Langley, CJ Addison, Terrance Curley and Joseph Brown Wolf; maternal grandparents: Major and Charlotte (Two Bulls) Brings Plenty; paternal grandparents: Cecil Sr. and Amy (Iron Lightning) Curley, Benjamin Brings Plenty, and Abraham Brings Plenty. Funeral services have been entrusted to Rooks Funeral Home of Eagle Butte. charlesrooksfuneralhome.com

The family of Tessa Lavae Curley created this Life Tributes page to make it easy to share your memories.